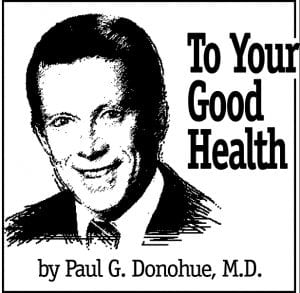 DEAR DR. DONOHUE: I don’t remember you addressing this subject, so I thought I would write. In 1997, I had a mild heart attack and went on medicines. Six months later I had another mild incident that led me to angioplasty. Ever since, I have been eating well, exercising and taking all my meds. My cardiologist says I have great collaterals. I have sprouted new vessels for my heart. I thought I should have some kind of intervention, but the doctor says no. Can you discuss autogenesis? Am I related to a starfish? — R.S.

ANSWER: You’re the first writer ever to use the word “autogenesis.” If a starfish loses an arm, it grows another — autogenesis. Humans have the same ability when it comes to blood vessels. They can grow new ones, and do so in many instances. Heart-attack victims often can sprout new arteries. It’s a long process. It doesn’t happen overnight. And it doesn’t happen to all people. Count yourself lucky.

The booklet on CAD — coronary artery disease — discusses how vessels become plugged and how they are treated. To order a copy, write: Dr. Donohue — No. 101W, Box 536475, Orlando, FL 32853-6475. Enclose a check or money order (no cash) for $4.75 with the recipient’s printed name and address. Please allow four weeks for delivery.

DEAR DR. DONOHUE: You are familiar with energy drinks, aren’t you? Well, my teenage son has gotten in the habit of drinking them far too often. He says they really do increase his energy. I’m worried that they might be dangerous. Will you please provide some information? — B.B.

ANSWER: One kind of energy drink is a mixture of caffeine and alcohol. In November 2010, the U.S. Food and Drug Administration declared such combinations to be unsafe. I’m sure your son isn’t using this sort of energy drink. Others are.

Your boy is likely drinking caffeinated beverages. The amount of caffeine in these drinks ranges from 50 to 505 mg of caffeine per can. A 6-ounce cup of coffee contains 77 to 150 mg of caffeine.

Adolescents drinking such large amounts of caffeine can suffer sleep disturbance, shaking hands and possibly a rise in blood pressure. One school district has banned these drinks at all practices and games. I think that’s a good policy.

DEAR DR. DONOHUE: had my gallbladder removed a year ago. I now have diarrhea, and the doctor says it’s from not having a gallbladder. My doctor prescribed cholestyramine. It causes severe constipation. I now take half the dose, but still I have to be careful about what I eat or drink. Do you have a suggestion? — E.J.

ANSWER: Without a gallbladder to store it, bile drips into the digestive tract constantly. That constant drip irritates the tract in some people, and it causes food to rush through faster than normal. You have found the cure for this — cholestyramine. The only matter that remains is to determine the correct dose for you. That will come with a little experimenting.