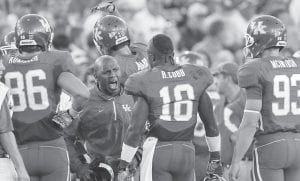 Kentucky coach Joker Phillips addressed his team during a timeout in their NCAA college football game against Akron in Lexington on Sept. 18. (AP Photo/Ed Reinke)

Ricky Lumpkin hasn’t bothered to take a glimpse at the Top 25 polls this season, so it’s not surprising the Kentucky senior defensive tackle isn’t concerned about whether the undefeated Wildcats are getting any respect.

Though Kentucky has handled Louisville, Western Kentucky and Akron by an average of 26 points, the Wildcats have failed to receive a single vote in the poll.

The Cardinals, Hilltoppers and Zips are a combined 1-8. If Kentucky wants to get the nation’s attention, Lumpkin knows there’s an easy way to do it: Beat No. 9 Florida (3-0) on Saturday.

“The way you get up into (the polls) is beating teams like Florida, go into Ole Miss and show people you can win on the road in the SEC,” Lumpkin said. “Then you’ll get the whole Top 25-ranking thing.”

It’s a refrain repeated by Lumpkin’s teammates, perhaps a sign of how times are changing at Kentucky. A few years ago, starting the season with a three-game winning streak regardless of the competition was cause for celebration.

This year, it’s been met with a yawn. The Wildcats have won the first quarter of their season but know they’ll be defined by what they do the rest of the way. They’ll start against a program they haven’t beaten since before any of the players on the current roster were born.

Kentucky’s lost 23 straight to the Gators, one of the infamous streaks former coach Rich Brooks said needed to be stopped before the Wildcats could honestly say they’re moving up in the nation’s toughest conference.

“It’s something that everyone wants to here, you want to end these streaks,” Lumpkin said. “If you end a streak here, you’ll go down forever in history.”

Too often against the Gators, the games have ended in infamy. Florida has used Kentucky as its own personal plaything over the years. Only five of the games have been decided by a touchdown or less. Last year’s 41-7 Florida win followed a familiar refrain: the Wildcats self-destructed early and spent the rest of the game trying — and failing — to catch up.

“You’ve got to keep your head,” Lumpkin said. “Florida’s one of those places, things can get away from you pretty quickly.”

Staying cool is one thing the Wildcats have been able to do with relative ease during the first three weeks of the season. They’ve been largely unchallenged and shown a capacity to score points in bunches. Kentucky ranks second behind No. 1 Alabama in the SEC in scoring, putting up 44.3 points per game.

And they’re doing it without turning the ball over. The Wildcats have snapped the ball 178 times this year without giving it away. It’s something they’ll have to continue against the Gators, who lead the SEC in turnover margin.

Yet the Wildcats have put up those eye-popping numbers against mostly overmatched competition. Louisville is rebuilding. Western Kentucky is taking baby steps at the FBS level and Akron was coming off a loss to Gardner- Webb.

It’s why the Wildcats haven’t gotten carried away with themselves despite their solid start. Even chatty running back Derrick Locke, who put up a career-high 166 yards against the Zips, is remaining humble, or at least as humble as he can manage.

Head coach Joker Phillips gave most of the credit to the quiet leadership of junior star Randall Cobb and quarterback Mike Hartline.

The Wildcats didn’t get too high on themselves even after winning their final three SEC road games a year ago. They’re not going to do it after beating three teams they know they were supposed to handle with ease.

Maybe, but the Wildcats have been asleep at the wheel recently against the Gators. They trailed by 28 points at the end of the first quarter in the Swamp two years ago and were down 31-0 at the end of the opening 15 minutes last season.

“This has got to be our best football game,” Phillips said. “We’ve got to play for four quarters.”

Kentucky hasn’t done it yet this season and needed a wake-up call against Akron to get going. Tied at 3 late in the first quarter, Phillips became visibly angry after a penalty pushed the Wildcats to the edge of field goal range.

He called timeout and spent the better part of a minute reminding his players that lethargic starts won’t be tolerated if the program wants to be considered a legitimate contender in the nation’s toughest conference.

“We know we were just killing ourselves,” Hartline said.

They won’t need to do that for the Gators to extend the streak to 24 games. Kentucky is well aware it’s best may not be good enough. Then again, the Wildcats know their best these days is a little better than it used to be.

“This is a huge challenge for us, but that’s what we signed up for,” Phillips said. “That’s why we signed up to play at Kentucky.”