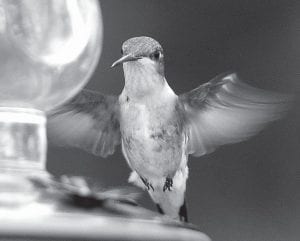 I know for sure that I read an article from a respected source recommending that bird lovers take down their hummingbird feeders well before cold weather hits. Leaving them up, the article said, might entice the hummers to stick around and postpone migrating.

Nothing could be further from the truth, nor can I find the site where I read that nonsense. What I can find on Internet sites like Wild Birds Unlimited, Audubon, Cornell University and other places devoted to protecting wild birds are recommendations that we should, in fact, leave our hummingbird feeders out and stocked with fresh, clean nectar for at least two weeks AFTER we’ve seen the last little hummer using it, but then take the feeder down before it has a chance to freeze solid and break.

According to the experts, the only reasons a hummer might fail to migrate is because of injury, illness or the extremely rare case where it’s genetic wires got crossed. Food availability has nothing to do with it. Migratory birds are genetically predisposed to head south for the winter and north in spring to wherever it is they are wired to go.

If anything, leaving our feeders out is a good idea because migrating hummers do need have available nectar to sustain their strength and stamina for a journey of several thousand miles to Central America.

Believe it or not, hummingbirds are carnivores and actually get their protein from catching gnats, small flies and other insects. The nectar they consume from feeders and flowers simply fuels their insect catching activity. At least that’s what the experts say. I have personally watched them feed on a swarm of gnats and even get aphids off my eggplant, but I’ve never seen one catch anything as large as a common housefly.

They frequently have to compete with wasps, honeybees and yellow jackets on my feeder, and sometimes they actually get into physical fights with the wasps. I’ve actually seen wasps run them off my feeder, at which point I run the wasps off and get them with a flyswatter or my ever ready can of pressurized wasp and hornet killer.

And before you throw your hands up and yell at me, I am always careful that the jet spray does not hit or even come close to the feeder or the birds. And I’m not going to stop waging that sort or warfare on the wasps that I despise almost as much as I do blackbirds. In fact, if I could get close enough to them I would hit the flying rats with a squirt of this stuff called dielectric with “over 47,000 volts of knockdown power.” It says so right on the can, but I have no idea what it’s talking about. I do, however, make sure that I don’t hit myself with the stuff.

If you have hummingbirds in central or eastern Kentucky they are almost sure to be of the Rubythroated species. A couple or three others species do show up once in a while, including Rufous and Allen’s, but they are exceptions to the rule according to folks who make their livings by studying birds and keeping up with their habits and peculiarities. I’m content to take their word for it.

And when I say “hummingbirds” I am talking specifically about ruby-throats because there is at least one species in the southwestern U.S. that does not migrate. Suffice to say that there are at least 21 known species of hummers worldwide and that no more than four of them have ever been sighted in Kentucky.

In the meantime, of the half dozen hummers that use my feeder, only one is male and the females seem united in their determination to make his life as miserable as they possibly can.

The females fight each other, almost constantly, if more than one is trying to use the feeder at any given time, it’s usually a oneon one battle. On the other hand, anytime the beautiful little male tries to take a drink, he gets dive bombed by as many as four or five females who chase him into the trees. I’m not sure the poor little fellow will have enough energy to migrate unless he sticks around for a while after the women leave for Honduras.

I will not be taking my feeder down until I’m reasonably sure he’s halfway to wherever he’s going. And I will be hoping that he’s not even in the same country as the women who have made his life so miserable this summer.