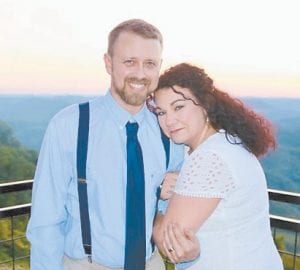 The bride and groom are David and Angie Hatton Fields. (Photo by Amy Carmen)

There aren’t any words to describe the taste of the first tomato from the garden. Thank God I was able to pick some today, Sunday. I ate them right then and there.

I’m glad my husband doesn’t like them because I would have had to share. We should have many and many more crookneck squashes ready to pick this coming week. It’s a good thing because our freezers are almost bare from last year’s crop

Oh, how I love the idea of raising and putting up our very own vegetables. Now I know why my Papaw Pennington wanted the house in the head of the “holler” at Marlowe Coal Camp, more garden space according to him.

Speaking of Marlowe Coal Camp, I found Mom’s book of “Daily Life in the Marlowe Coal Camp” by Thelma Ruth Cornett. These are experiences and memories of Thelma’s from 1926 to 1944 as told to her son, James Gordon Cornett. If he will give me permission I would like to start printing some of her bits and pieces in here. Mom loves reading them because they are about people she grew up with and who had very similar experiences that she had at Marlowe. 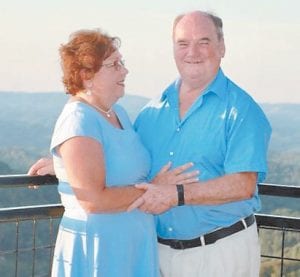 Pictured are father and mother of the bride, Billy Hatton and Sandra Cook Hatton. (Photo by Amy Carmen)

I want to tell something that my brother, Albert Tacket, told me on one of his weekly phone calls to Mom. When he calls of course whoever is there with Mom gets the privilege of getting to talk to him, too.

So, I was the one with her the evening when he called and had this tale to tell us. We were talking to him about how Mom’s hummingbirds are loving the feeder this year and I had gotten her a garden spinner that has a gazing ball on one end and hummingbirds eating from flowers on the other end. It’s made from rustic-like metal.

She had me to put it where she could see it from her recliner, which is almost right under the feeder. Well, lo and behold, the birds like to get a sip of sugar water and then light on it and rest then flit right back up there and sip some more. This tickles her to death.

I have to admit it tickles me pretty good, too. But, anyway I was telling him how much she loves watching those hummingbirds and he said, “Well, let me tell you one you are going to love.”

He said he had his work truck parked in their driveway. This must have happened over the weekend the way I figure. He said one morning he drove that truck to work and kept hearing birds chirping like crazy.

When he got to work he looked under the hood and believe it or not there was a bird’s nest with baby birds just holding their mouths open to be fed. It was stuck down in the front between the radiator and other parts that he told me, but I don’t remember the names because the whole time he was telling me this I was just imagining that mommy bird back at this house going absolutely crazy hunting for her babies.

I said, “Bless her little heart, I can just see her flying all over that driveway, thinking to herself, ‘Now, I know I’m not that crazy. I know I really did lay some eggs and they hatched and I left my babies right here, they just couldn’t disappear’.”

Some of the latest things happening at Letcher County Senior Citizens are very secretive so I really can’t tell you much about what’s going on right now. Last week and the week before they have been taking pictures of us in a cap and gown. They say we are graduating because we are seniors.

Then today they asked us to bring in pictures of us when we were younger. I’m thinking this is going to be something like the presentations they do at the graduations with the baby pictures, but I guess we will just have to wait and see. One thing about it, they surely have my interest peaked.

I saw on Facebook this weekend where our State Representative, Angela Hatton, was married to David Fields at one of the new overlooks on Pine Mountain. The pictures were absolutely beautiful. We want to congratulate them. I know Oma would have been so proud of Angie and all that she is trying to accomplish for her hometown. All of her community is very proud of her, too.

Once again, I will end with Oma’s weekly plea, “ Try your best to be in church Sunday.” I’ll also add mine, “If your church has services throughout the week and on Sunday evening, God wants you there then, too.”