Hunt was a success; next event April 5 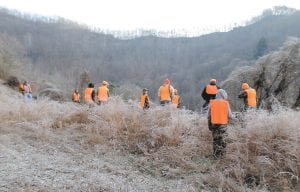 The Little Shepherd Chapter of the National Wild Turkey Federation held its annual Rabbit Hunt For Kids on December 28. Several Letcher County youth and accompanying adults were divided into groups and taken rabbit hunting early in the morning. Several game wardens were on hand to give safety talks and went along for the hunt. After about three hours of hunting had passed, all gathered at the Mountain Shriners building in Whitesburg to eat a big meal and to receive gifts. After eating, the group traveled up to the county baseball and soccer park to shoot clay pigeons. The event ended with several door prizes being given away. The Little Shepherd Chapter would like to thank everyone that helped with the event. Their next event will be the Hunter’s Banquet and Auction to be held April 5 at the Pine Mountain Grill in Whitesburg. Anyone interested in joining the Chapter can contact Richard Brown at 633-0475 or any other member.