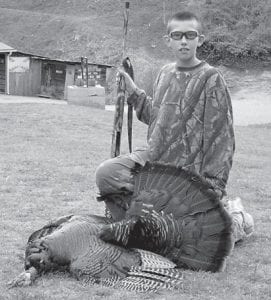 — Owen Gibson II killed this turkey on opening day of the spring turkey season while hunting with his mother. He is the son of Owen and Nikki Gibson and the brother of Kane Gibson of Cowan. His grandparents are Leonard and Kay Boggs, also of Cowan, Carlene and Kenneth Oliver of Columbia, and Codell and Debbie Gibson of Ermine.