By TODD RICHMOND The Associated Press 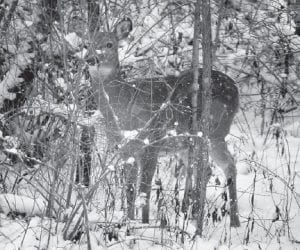 An antlerless white tail deer blended in with the brush and snowfall in the woods in Zelienople, Pa. ( AP Photo)

This is Wisconsin’s gun deer season, a tradition as engrained in this rugged state’s identity as beer, brats and cheese. But as the years slide by, fewer people seem to care.

Hunting’s popularity has waned across much of the country as housing tracts replace forests, aging hunters hang up their guns and kids plop down in front of Facebook rather than venture outside.

The falloff could have far-reaching consequences, hunting enthusiasts say. Fewer hunters mean less revenue for a multi-billion dollar industry and government conservation efforts. It also signals what could be the beginning of the end of an American tradition.

“As paradoxical as it may seem, if hunting were to disappear, a large amount of the funding that goes to restore all sorts of wildlife habitat, game and nongame species alike, would disappear,” said Steve Sanetti, National Shooting Sports Foundation president.

Hunting generates billions in retail sales and pumps hundreds of millions of dollars into government conservation efforts annually through license sales and federal taxes on firearms and ammunition sales.

Millions of Americans still hunt, of course, and some states have seen increases in license sales over the last 20 years. But the overarching decline has outdoor advocates worried.

Suburban sprawl has consumed prime hunting land, forcing many hunters to choose between driving for hours to get to the woods or staying home.

“Whole farms turned into housing developments or shopping malls,” he said. “Once that land is lost, you can’t get it back.”

More children are growing up in front of computer screens rather than romping through the woods.

“Fifty years ago, a lot of kids would hunt and fish and be outside,” said Mark Damian Duda, executive director of Responsive Management, a Virginia-based natural resources research group. “Now it’s easier to sit in your playroom and play video games.”

Craig Hilliard, 65, runs the Pheasant Inn, a Briggsville, Wis., resort that doubles as a deer registration station. He said he knows about two dozen hunters who have retired from the sport.

“There are not enough of the young people taking up the sport to replace who’s retiring,” he said.

The dropoffs have hurt state conservation agencies that rely heavily on license sales for funding.

In Massachusetts, the lost revenue has hampered the state’s habitat restoration efforts and its ability to repair its vehicles. State wildlife officials have pooled resources with other conservation groups and pursue federal grants more aggressively, said Marion Larson, a Massachusetts Department of Fish and Game biologist.

“It’s forced us to be more creative with money we have,” Larson said. “That’s going to continue into the future, and not just here in Massachusetts .”

Michigan, meanwhile, has seen a 31 percent drop in overall license sales over the last 20 years, according to the U.S. Fish and Wildlife Service. The ensuing revenue losses mean wildlife officials haven’t been able to fill 35 vacant positions and have taken a less detailed approach to managing the deer population.

In Pennsylvania, license sales have dipped 20 percent over the last two decades. The state’s game commission has had to cut spending by about a million dollars in the last two years, cutting back efforts to repopulate pheasants, leaving 30 positions unfilled and asking employees to repair their own vehicles, Feaser said.

Decreasing license sales in Wisconsin, one of the nation’s destination spots for deer hunting, hasn’t been as drastic, falling 2.5 percent over the last 20 years. But the dropoff has grown dramatically steeper in the last decade. License sales for the state’s traditional November firearms deer hunt dropped 9 percent between 2000 and 2009.

A fee increase in 2005 has kept revenue relatively flat over the last decade, said Joe Polasek, the state DNR’s budget director. But the money hasn’t covered rising expenses such as building rentals and health insurance, preventing the agency from filling about 60 positions.

To help stave off the losses, states and outdoors groups have been stepping up efforts to retain and recruit hunters. The U.S. Sportsmen’s Alliance, the National Shooting Sports Foundation and National Wild Turkey Federation launched the program Families Afield in 2005 that calls for states to scale back youth hunting regulations. Thirty states have since reduced or eliminated minimum hunting ages, NSSF spokesman Bill Brassard Jr. said.

Michigan officials have off ered more hunting workshops for women and children. They also hope to use a federal grant to bolster participation in a decades-old program that pays some landowners up to $10 an acre to let hunters onto their property. Only about 50 farms out of potentially thousands currently participate, state officials said.

Wisconsin’s Department of Natural Resources is researching how best to use social networking to recruit kids into the sport. The agency also expanded its Learn to Hunt program last year to off er reimbursements to hunting clubs and associations that teach children and novices about the sport.

But the hunting fabric continues to fray.

Jeff Schinkten of Sturgeon Bay, Wis., is president of Whitetails Unlimited, a national conservation organization that works to preserve deer hunting. He said his 33-year-old son, Oliver, recently gave up the sport after years of seeing no deer and taking care of a newborn child.

“I miss my son and wish he was out here,” Schinkten said. “Hunters better be concerned. If it keeps going like this, it’s not going to be good. We lose hunters, we lose license sales. It’s just a vicious circle.”