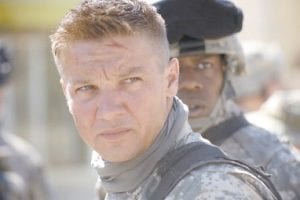 Actor Jeremy Renner is shown in a scene from “The Hurt Locker.” The National Society of Film Critics this week selected the film as the best picture of 2009. The film is also nominated for a Golden Globe award for best motion picture drama. The Golden Globe awards will be held Jan. 17. (AP Photo/Summit Entertainment)

The National Society of Film Critics this week selected “The Hurt Locker,” a film about an elite Army bomb squad unit that works in Iraq to defuse improvised explosives while under the threat of insurgents, as the best picture of 2009.

The society, composed of film critics from some of the country’s top publications, also bestowed honors on the movie’s director, Kathryn Bigelow, and lead actor, Jeremy Renner.

The society picked Yolande Moreau as best actress for her performance in “Seraphine,” a French film about the painter Seraphine de Senlis.

Joel and Ethan Coen won best screenplay for “A Serious Man,” a dark comedy set in 1967, while “The Beaches of Agnes 40,” an autobiographical documentary about the life of director Agnes Varda, was selected as the best nonfiction film.

Mo’Nique, the Baltimore-born comedian best known for her roles in television sitcoms and as the host of her own talk show, was selected as best supporting actress for her portrayal of an abusive mother in “Precious.”

Austrian Christoph Waltz won for best supporting actor for his work as the Jew Hunter in “Inglourious Basterds,” a Quentin Tarantino war film starring Brad Pitt as the leader of a group of soldiers trying to kill Adolf Hitler.

Forty-six of the society’s 64 members voted during Sunday’s meeting at a midtown Manhattan restaurant.

The society, founded in 1966, has a reputation for picking for- eign films or critics’ darlings. Rarely do the group’s selections mirror those given out during the Academy Awards, but its members are highly esteemed by filmmakers and film critics.

The Academy Awards are set for March 7.