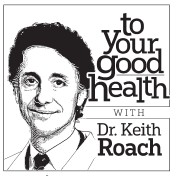 DEAR DR. ROACH: Our issue is with doctor’s offices and germs. My husband won’t see a doctor because he says they are some of the “germiest” places around. After his last visit to the dermatologist, he said he wouldn’t go back because the doctor didn’t wash his hands or change gloves before examining him. I asked a doctor once to wash his hands, and he got very defensive, to the point of being rude, and I didn’t feel comfortable seeing him again.

Also, what about skin diseases, such as rosacea, lupus, etc.? Can these be transferred via stethoscopes, equipment or incidental contact? What can I do to reassure my husband that he won’t get a disease at the doctor’s office? — R.

ANSWER: It is certainly reasonable to expect that your doctor’s office be kept clean, and you have every right to ask your doctor to wash his or her hands before an exam, if you haven’t seen him or her washing hands in front of you. I don’t blame you for being uncomfortable about seeing the defensive doctor — infection control is part of our business.

However, it is impossible (and unnecessary) to keep the surfaces truly sterile, since diseases that are transmitted in the doctor’s office most often come from hands, or occasionally are airborne, such as during flu season (which is why you may be asked to wear a mask if you have a cough or sneeze). One exception is C. diff, which is why it is such a problem in hospitals. Washing your own hands is a good idea when leaving the physician’s office, but you don’t want to go overboard worrying about acquiring diseases in the doctor’s office.

Rosacea and lupus are not spread by skin-to-skin contact.

DEAR DR. ROACH: I was prescribed Lamisil (terbinafine 250 mg). I developed diarrhea after 44 pills. My doctor told me to stop taking the pills. The diarrhea has continued, and it still hasn’t stopped to this day. I tried over-the-counter treatments, which did not help. I read on the Internet that this is a common side effect. I’m concerned and don’t know what to do to get relief. Do you have any suggestions? — E.B.

ANSWER: I also have read in online forums about diarrhea lasting for months after oral terbinafine, a powerful antifungal agent that can be used as a cream. However, the published reports state that the diarrhea, which isn’t uncommon, usually goes away by itself pretty quickly. ©2016 North America Synd.