Husband, wife charged with making meth inside their home at Cromona 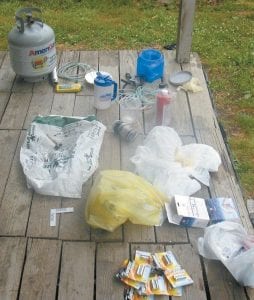 Police recovered these components used to make the illegal drug methamphetamine after conducting a ‘knock and talk’ at Cromona.

A husband and wife from Cromona are being held in the Letcher County Jail without bond after being arrested for making methamphetamine.

Larry W. Bentley Jr., 33, and Devin Bentley, 32, both of 3999 Highway 805, were each charged last week with manufacturing methamphetamine, unlawful possession of a meth precursor and drug paraphernalia.

While conducting “a knock and talk” at the Bentley home on June 9, the Letcher County Sheriff ’s Department and Kentucky State Police got permission to search the home and found rubber tubing connected to a glass bottle which are components used in the manufacturing of methamphetamine. Other items used to make meth, including lithium batteries, propane and cold packs containing anhydrous ammonia, were found both inside the house and outside, where some were hidden.

Lt. Brian Damron of the Letcher County Sheriff ’s Department said the tubing and bottle are called a generator and are where the components come together and chemically bond to make the actual meth.

Damron said the home smelled strongly of cat urine, which is also a sign that meth is being made nearby. A meth cleanup team was called in to assist and the home has been condemned until it is made safe.

Damron said police had received several complaints about a large amount of traffic visiting the Bentleys.

Last week’s arrests marked the second time this year Larry Bentley was charged in connection with the manufacturing of methamphetamine. Bentley was also arrested January 11 after Jenkins Police Chief Adam Swindall pulled over a white Dodge pickup truck after receiving a call that Larry Bentley was stealing items from the Jenkins Rite-Aid.

Swindall found a meth pipe above the visor on the driver’s side in addition to the decongestant pseudoephedrine and other meth-making materials including a full propane tank, coffee filters, lithium batteries, cold compress packs and aluminum foil. A small piece of foil containing methamphetamine and a pill bottle containing two small bags of methamphetamine were also found. Larry Bentley admitted to Swindall that he was trying to make meth, the citation said.