I do not believe in UFOs 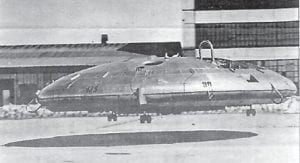 This Canadian aircraft, the Avrocar, has often been mistaken for a UFO. (U.S. Air Force photo)

During my 27-year Air Force career, I have flown over both the Atlantic and Pacific oceans many times in many types of aircraft. I have seen objects that I cannot explain in the early morning sunrises, and when the sun sets at night.

I’m smart enough to know that your eyes can play tricks on you.

In my printing career field with my top secret clearance, I’ve seen many reports of UFO sightings all over the world. All these reports have been explained to my satisfaction as not being UFOs.

Last week I got a call from Wayne Collins, a classmate of mine from Jenkins, telling me he saw something in the skies above Wise County. He asked me about the sighting, knowing I’ve seen things in the sky that were hard to explain.

Luck had it that I just saw a story in my Air Force paper at Travis Air Base that explained everything. Wayne and other folks from Kentucky and Virginia saw a ‘flying saucer’ that was built by Canada a few years ago. Canada asked the U.S. Air Force to take over testing the ‘saucer’ when it became too expensive.

The Canadian Avrocar was the result of their effort to develop a supersonic fighter-bomber, capable of vertical takeoff and landing in the early 1950s.

The basic concept for the Avrocar is using the exhaust from turbojet engines to drive a circular rotor to produce thrust. By directing this thrust downward, it was believed the turbo-rotor could create a cushion of air under the aircraft, allowing it to float a few feet off of the ground as well as accelerate to high speeds at higher altitudes.

The U.S. Air Force was interested in the Avrocar’s vertical take-off and landing capabilities, which could hover below enemy radar and accelerate to super-sonic speed.

The photo I’m sending of the ‘flying saucer’ was taken at Langley Air Force Base, Va., and looks like it is landing or taking off from in front of the hanger that I worked in while I was flying with the Air Sea Rescue Service in ’47 and ’48.