‘I Love Lucy’ debuted 63 years ago 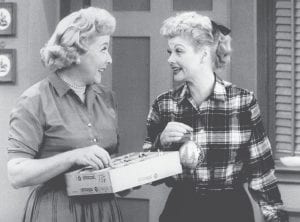 On this date in 1951, “I Love Lucy” debuted on CBS-TV. The show, which was at the top of the Neilsen television ratings when it ended after 179 episodes in May 1957, remains one of the most beloved situation comedy shows ever. It starred Lucille Ball, above right, and her real-life husband Desi Arnez as Lucy and Ricky Ricardo. Co-starring were Vivian Vance, above left, and William Frawley as Ethel and Fred Mertz, Lucy and Ricky’s New York City apartmentdwelling neighbors. Episodes of “I Love Lucy” still air today on the Hallmark Channel and elsewhere. (AP Photo)