‘I root for him,’ documentarian says of Calipari. ‘I didn’t used to.’ 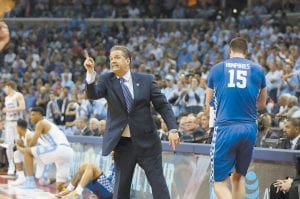 “One and Not Done” director Jonathan Hock wanted his ESPN documentary on John Calipari to show that the coach thrived on friction, and it did. (Photo by Vicky Graff )

It took Emmy-winning director Jonathan Hock almost 20 months to put together the documentary, “One And Not Done,” on Kentucky coach John Calipari that aired on ESPN last week.

Like many Kentucky fans have come to believe, Hock admits he perhaps had the wrong perception of Calipari until he had a chance to get to know him.

“Cal is a very complicated guy. There are a lot of facets to his personality. There is a lot to think about with Cal and there are very few easy answers with him,” said Hock. “I think when I first met Cal in 2012, I had only seen him from afar since his UMass (coaching) days. I thought he was slick and I had the impression there’s something that is off with him. Then when I got to know him I had the impression that something was not off, but something was very on.”

Hock got unlimited access to Calipari during the 10 months of filming that started with Calipari’s induction into the Basketball Hall of Fame to the NBA draft where Skill Labissiere and Jamal Murray were both first-round selections. During that time, he learned one thing that has also become obviously clear to me 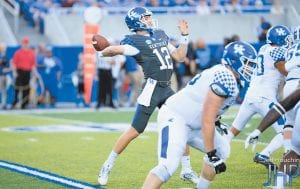 “Cal thrives on friction. Cal will create friction if he doesn’t have enough in his life. He’ll say something to tweak an opposing coach or another program or a player or something just to get the haters out. He feeds on that. He’s an extremely ambitious, competitive person,” Hock said.

“There are two things John was born to do. One is to sell. This dude, there’s nothing he cannot sell. Second thing, he was born to fight. Most of us avoid fights. Cal is very comfortable in situations where there is one thing both of us want and only one of us is going to get it and is going to do whatever it takes to get it.

”He thrives in that environment and that’s why sports are perfect for him. He loves being in that situation. I think he gets lot of motivation from being in a fight. He sees every scenario that confronts him as a very personal attack and he’s ready to fight.”

Hock said Calipari’s background being from a working class family obviously fuels his determination and fight. “I believe when Cal looks in a mirror he doesn’t see a guy with nice clothes, beautiful hair. Instead he looks in the mirror and staring back at him are coal miners and immigrants from his family background.”

Several coaches that Hock wanted to interview for the documentary declined. Former Connecticut coach Jim Calhoun did an interview, but it was obvious he was no Calipari fan. Hock also talked about how some coaches complained in 2012 when he was doing an all-access show weekly show on ESPN about UK basketball.

”I think there is a camp of coaches and writers that are very sanctimonious about college basketball and then there is Cal,” Hock said. “He is a realist and not sanctimonious about what the sport needs. This is a moneymaking enterprise at every level and Cal is not afraid of that fact. A lot of others are afraid of that, but he doesn’t shy away from that and that is where it gets complicated with Cal.

But the Blue-White Game that ended spring practice last week also showed that UK redshirt freshman Gunnar Hoak could be a future star as well. In fact, Kentucky may have never had more quarterback depth with last year’s starter, Drew Barker, coming back from his offseason back injury and true freshmen Danny Clark and Walker Wood both already on campus.

Hoak completed 12 of 18 passes for 92 yards and two scores for the White team in the Blue-White game during the first half. In the fourth quarter, he got two series with the Blue team — composed of No. 1 players at each position — and went 4-for-6 passing for 82 yards and ran for a 5-yard score.

“His confidence has gotten better as the spring went on,” offensive coordinator Eddie Gran said.

“He’s been very poised. You see he’s effortless at times,” Kentucky coach Mark Stoops said. “And I just like the way he handles himself back there. He throws a very catchable football. He’s very accurate. The more experience he gets, the better he looks.”

The former Ohio high school star admitted he was looking forward to the spring game and having a chance to show what he could do. “I would say that staying in the pocket and getting the ball out is one of my strengths. Something I need to work on that Stephen ( Johnson) does well is getting outside of the pocket and hitting that speed,” Hoak said. “It was a lot of fun out there, and a lot different from last year. I thought I did well. I have to keep getting better through May and come back in June, lift hard, and get ready for camp.”

Hoak thought he might be redshirted last year with Barker in line to take over the offense. When Barker went down with the back injury, many thought he might play but Johnson played so well that Stoops was able to stick to the plan to redshirt him. “Personally I think I am getting better every day. It was a good experience redshirting and learning the offense and getting that connection with the guys and hopefully getting to play more in the future,” he said.

He’s not worried about the depth of talent at quarterback, either. He says quarterbacks coach Darrin Hinshaw gives each player equal attention. “ You have to love to come into a college experience and compete with the other guys. That’s the name of the game to compete. If you win, you win and just keep getting better,” he said. “I have improved but we are all getting better. You just have to compete and give the best you have and see what happens.”

He said Hinshaw worked on his throwing motion to where he got the ball back more with a higher release. He also concentrated on his footwork and speed daily during spring practice and that will not change over the summer.

Hoak said he learned last season that it was not easy to play quarterback in the Southeastern Conference but likes the talent UK has.

“Stephen has improved a lot from last season. He’s become even more of a leader on the team,” Hoak said. “Drew did well. He stayed ready and was a big part of the team last year. He just could not play but he still had a huge role on our team and he got to do more and more as spring practice went on.

“The new guys (Clark and Wood) are a little shocked just like I was last year. Getting to know that college offense compared to what it was in high school is tough. But they are getting it and in the fall we are going to have a lot of guys battling to get playing time.”

Zy’Aire Hughes, a redshirt freshman from Mc- Cracken County, had been moved from receiver to defense back — at least for now.

“We’re exploring. We’re looking at him,” UK coach Mark Stoops said. “It’s a double-edged sword. We lose a bunch of wide receivers after this year, and he’s doing a good job at wideout. But we’re getting thin in the secondary, and he’s just so quick. He has such great change of direction. He can run, so I just wanted to look at him a bit.”

He was tagged as an “athlete” by most recruiting analysts because of his athleticism and ability to play either offense or defense.

What kind of advice would Dominique Hawkins give Kentucky’s incoming freshmen about UK fans?

“I would say off the court is the biggest adjustment to the fans. They are going to want pictures and signings, but you just need to learn to love the fans as much as you can,” he told vaughtviews.com contributor Jami Young during an autograph stop in Pikeville.

Hawkins and Derek Willis are touring the state together and have drawn big crowds across the state. Willis had similar advice for future Wildcats.

“You have to welcome it. I feel like a lot of people who come in not knowing what the culture is here it might freak them out, or they may get tired of being bombarded all the time because it’s around you 24/7, but if you just embrace it then you will be fan favorites and everyone will love you,” Willis said.

“That’s what I did over the years. I always embraced it since high school. It’s been great and I’ve had a lot of good memories with meeting fans. Growing up in Kentucky I understood all of the rivalries. I knew what University of Kentucky basketball meant to all of the fans and how loyal the fans are. I took that into account. The fans and their support are the main reasons why I came to Kentucky. It means everything honestly.”