I thumbed my way across the country 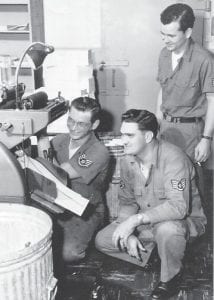 Everett Vanover is shown teaching two of his on job training men how to operate a model 1250 multilith press during the Korean War, 1951. The sergeant who is standing went to school with Elvis Presley.

When I received orders to Lackland Field, San Antonio, Tex., while stationed at Langley Field, Va., in July 1948, I had a bus ticket in my pocket. The bus was not leaving until the next day. I started thumbing my way to Jenkins to spend a day with my family.

The next morning I was at the bus station in Jenkins and found out it would be the next day for me to make connections heading southwest, so I started thumbing again.

A person in uniform could get rides very easily. You’ve got to watch out for folks who give you a ride two miles down the road and let you out at a bad thumbing spot.

While I was waiting for a ride outside a small town in Kentucky, a young lady came out of her house and stood next to me, flirting with me for the longest time. I had a heck of a time getting a ride while she was there.

One family that gave me a ride was on their way to another state to visit their son, who was graduating from basic training. I had nothing to eat all morning and was starved when the mother opened a bag of fried chicken and passed it back to their teenage daughter and me. I almost ate bones and all.

My longest ride was in a cattle truck that picked me up in Oklahoma and took me all the way to the San Antonio stockyards. I did not smell too good after that ride.

When I arrived at Lackland, I had beat the bus I would have taken by a day, and turned my ticket in for a refund.

I was assigned to the base printing department. I was a corporal, and promotion was frozen during peacetime. I was the youngest in the shop, but I had more time in service than the other printers, who were awaiting their discharges.

I was infatuated with the printing career field and was a fast learner. Within a year I was in charge of these men. That did not go over well with the other printers.

I hate to say this, but when war started in Korea, that changed my life for the better and opened up the new training base in New York. As the noncommissioned officer in charge of the printing department, I was promoted to staff sergeant and was on my way to becoming one of the best printers in the Air Force, both as a printer and repairman on all printing equipment that we used.