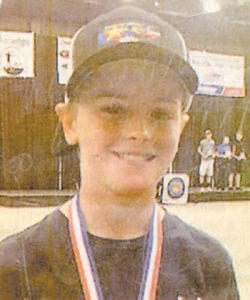 He has won 20 first-place medals while competing in 27 tournaments this year, and was second in the NASP National Archery Tournament. He received a $2,000 prize after winning the Elementary Boys Academic Archer Award from NASP. He is one of 10 archers in the state who was honored for academics.

Ian is a fifth-grade student at Oak Hill Elementary School where he is on the honor roll and shoots for the Pulaski County Archers. He is a member of the BETA Club, the Robotics Club, and Oak Hill’s Gifted and Talented Program, and plays basketball.

He is a son of Chris and Kelli Paris, and a grandson of Ed and Susie Day Holbrook.