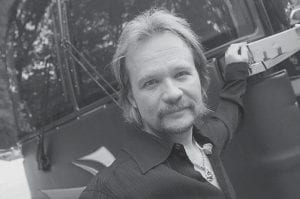 Travis Tritt stood with his tour bus minutes before going on stage at Chastain Amphitheater in Atlanta on Aug. 22. (AP Photo/John Amis)

With his new album, Travis Tritt wanted to delve deeper into his bluesy, soulful side. He wanted to build on his musical kinship with fellow Georgians like the Allman Brothers and Otis Redding. He wanted to break free of Nashville conventions.

He wanted to enlist the help of …. “American Idol” judge Randy Jackson?

Jackson and Tritt co-produced “The Storm,” which came out last week. While the choice might surprise viewers who know Jackson only as the balance to Simon Cowell and Paula Abdul, it’s not a stretch to those familiar with his pre-“Idol” days.

Jackson played bass in the band Journey during the ’80s; he recorded, toured and performed with the likes of Mariah Carey, Whitney Houston, Celine Dion, Madonna, Elton John and Destiny’s Child; he was a longtime A&R man at Columbia and MCA.

The two met a couple of years ago when Tritt performed on a collaborations album with Sam Moore of Sam & Dave. Jackson was producing, and as Tritt stepped from the vocal booth, Jackson shot him a funny look.

Tritt was intrigued. He’d recently parted with Columbia Records, and after signing with the independent Category 5 Records, he felt more freedom to experiment. Like fellow veterans such as Ricky Skaggs and Emmylou Harris, he’d reached a stage when the chart no longer drove his career.

“The Storm” isn’t a huge departure for the Marietta, Ga., native. Going back to his 1990 debut, Tritt set himself apart from peers like Garth Brooks, Clint Black, Vince Gill and Alan Jackson with a bluesy, rock edge. Of the five, he was the one who looked as though he’d just hopped off a Harley.

But he goes a shade farther here, touching on several styles and bringing in different guests. The snarling “Somehow, Somewhere, Someway” features a heavy workout by blues guitarist Kenny Wayne Shepherd; Tritt and Matchbox Twenty frontman Rob Thomas co-wrote the melancholy, “What If Love Hangs On;” Richard Marx penned the funky first single, “You Never Take Me Dancing;” and Charlie Daniels lets loose on fiddle on the honky tonk “High Time for Gettin’ Down.”

“This album shows all the different influences I’ve had,” Tritt said. “I’ve tried to do that on past albums, but a lot of times you don’t delve much into other things because if you’re making a country record for a country label, you feel a certain obligation, whether it’s real or implied. You think, ‘I better try to do this as much straight down the pike country as I possibly can to keep these guys happy.'”

Marx, the former pop star who’s now in demand as a songwriter, linked up with Tritt through Jackson. He said he immediately thought of “You Never Take Me Dancing” as the perfect fit for Tritt. The song is climbing Billboard’s country chart and has cracked the top 30.

“For that to happen the way it did is remarkable – for me to think that this is great for Travis and for him to hear it and agree,” Marx said recently.

Although most of Jackson’s work has been on the pop side, he had no reservations about producing a country act. He tries not to pigeonhole singers, he said, especially one with Tritt’s range.

Tritt, 44, got his start singing in the church choir and taught himself to play guitar. He quit his job at a heating and air conditioning company in 1981 to chase a recording contract.

After years of playing bars, bowling alleys and pool halls, he signed with Warner Brothers in 1989 and hit big right away.

His streak continued several years before tailing off in the late ’90s. He rebounded a few years later with another run of hits including the No. 1 “Best of Intentions.”

“I’ve been lucky because through my whole career I’ve been able to do records I wanted to do without having to feel like I had to follow a specific trend, what was hot at the moment or that kind of thing,” he said. “I’ve always known who my audience was and always felt they were out there.”