By ROB MERRILL
The Associated Press 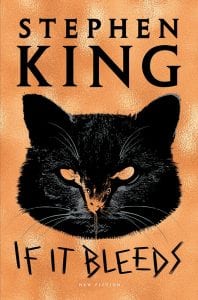 “If It Bleeds,” by Stephen King (Scribner)

I like to think of Stephen King as a high-paid starting pitcher. Between starts — bestselling novels often thick enough to be doorstops — he works in the bullpen, writing novellas. Over the years, many of those have been made into movies that are now essential parts of the King canon like “Stand By Me” and “Shawshank Redemption.”

“If It Bleeds” consists of four stories and at least one of them may soon come to a screen near you. The eponymous tale lets readers spend some more time with private investigator Holly Gibney, the star of King’s latest novel, “The Outsider.” Picking up not long after the end of that book, Gibney is back at home in Pittsburgh when a bomb goes off at a local middle school, killing dozens. Without giving too much away, Holly suspects it’s the work of a new kind of Outsider and it may just be a jumping off point for season two of the popular HBO series.

The other three stories in the collection —”Mr. Harrigan’s Phone,” “ The Life of Chuck” and “Rat” — don’t feel quite as weighty, but they’re all breezy reads with a hint of the supernatural. King has some fun with technology in the lead story, as a young man befriends his extremely wealthy neighbor, a businessman who retired before the Internet changed commerce. When the boy gifts him an iPhone, Mr. Harrigan’s reaction is priceless: “It’s like a broken watermain, one spewing information instead of water.”

“The Life of Chuck” makes the current global pandemic look tame by comparison. The story begins in a pre-apocalyptic world, where species are dying, electricity is flickering and nobody quite knows humanity’s fate. When a message begins to appear on billboards and buildings around town — “39 GREAT YEARS! THANKS, CHUCK!” — the story unfolds in reverse as we learn who Chuck is and discover exactly how we each contain multitudes.

The final story in the collection, “Rat,” revisits a frequent King theme — the lengths writers will go to put words on a page. Turns out they can’t all be Stephen King, cranking out novels and novellas at a rapid rate.

If the stories have anything in common, it may be their appreciation for the little things in life. Chuck can’t live forever in his story, but King’s description of an impromptu dance Chuck once performed with a young woman to the beat of a street drummer is the kind of moment anyone would smile about on their deathbed: “He frees the button on his suit coat, brushes the coat behind him with the backs of his hands, hooks his thumbs into his belt like a gunslinger, and does a modified split, out and back.”

King fans probably won’t consider this collection among his greatest works, but we’ll do anything for diversion these days and a few more hours with this master storyteller are welcome.