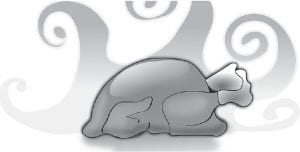 Okay, it’s the wee hours (3:35 a.m.) of Sunday night/Monday morning before Thanksgiving at this writing, but I woke up hungry after dreaming about leftover turkey and actually made it all the way to the refrigerator before realizing that it was, in fact, a dream.

If all goes as planned, however, next Sunday night it won’t be a dream. I will wake up hungry and there will be a platter of dark meat put back but easy to reach, just for me on the top shelf and I will convince myself that a good cold turkey sandwich is just the thing I need to finish off a good night’s sleep.

I am fortunate to have a family of white meat lovers with nary a one of them prone to even look at the thighs, wings and drumsticks. I tell them to put it on the table anyway and save every scrap because it would be a shame to see it go to waste.

The truth of the matter is that if a turkey carcass didn’t have a bunch of dark meat, I would opt for hamburgers or pork chops for the celebration dinner or simply make do with cranberry sauce, stuffing, half a pumpkin pie, some biscuits and a jar of apple butter.

I am the only person I know who shops for turkey thighs at the supermarket while everybody else is shopping for breasts. Unfortunately, they are pretty hard to find because nobody else is on the market for them. If you want to find just dark turkey meat at the grocery, you just about have to buy turkey sausage or bologna. And both of those products have plenty of it. Sausage and bologna are what happens to the legs, thighs and wings when they stuff those big freezers with whole turkey breasts. And that’s a crying shame if you ask me.

I’ve tried the turkey sausage and bologna and decided that both are sorely lacking, but I do hope to enjoy cold turkey midnight snack sandwiches throughout most of December. Daughter Jennifer and her husband, Kevin Ochs, will bake the first one for Thanksgiving dinner at their place and I’ll bring home enough to last a week or so. Then Loretta will fix one for Christmas and I’ll eat on it until well past the New Year. The way I have it figured, I should be well set up.

In other news, I’ve had numerous inquires as to how the apple butter project that I mentioned here a few weeks back actually turned out.

I’m proud to say that it went much better than original expectations and I never lifted a hand to make it happen.

Loretta took over as soon as she discovered that a combination of laziness and Mr. Parkinson would not allow me to use the apple peeler. And the truth is that my hands shake so badly that everybody in the house is in mortal danger any time I try to use a knife for anything.

Still, we had over a bushel of Gold Rush apples and something had to be done with them before they rotted.

Loretta read somewhere that apple butter was actually better if you didn’t peel the apples to begin with. She simply cut the apples up into quarters, cut the seed cores out and ran them through a food processor, peels intact, that converted them into a somewhat lumpy, thick apple sauce.

To 16 cups of this sauce, she added a cup of water and a cup of cider vinegar and let it cook in a crock-pot set on high for several hours. Then she added 4 tablespoons of cinnamon, 2 of ground cloves, 2 cups of brown sugar, 6 cups of white sugar and mixed all that up real good, still in the crock-pot, with a regular old kitchen electric mixer and let the mixture cook on low all night and up into the next day.

She lets it cool, then attacks it again with the mixer to get a very creamy consistency, puts it in pint and/or 12-ounce jars and cans it a water-bath canner, but I don’t remember how long it needs to boil in the canner. I’m sure you can find that info somewhere.

Also, use white and brown Splenda sugar equivalents if you are making it for diabetics. It costs more than regular sugar, but you can find it in cup-forcup mixtures at most grocery stores and, if anything, it actually tastes better to me than regular sugar.

I’m reasonably sure that Loretta is going to tell me when she reads this that I didn’t get the process exactly right, but I’d be willing to bet good money this will work. Bottom line is that she has turned out the best apple butter I’ve ever tasted and I suspect she will be making more before you read this because there’s still a peck of apples that we dare not let go to waste.

Once they are turned into butter, they go to waist and, for whatever reason, that seems to be acceptable.