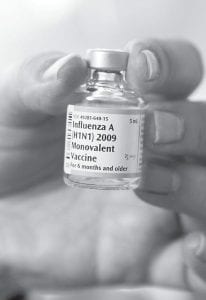 Hundreds of people on any given day will die, develop the paralyzing Guillain-Barre syndrome or have spontaneous abortions, and that doesn’t necessarily mean that their swine flu vaccination shot was to blame, a new study says.

As millions of people worldwide begin getting the new swine flu shot, public health officials are bracing for rumors about dangerous side effects linked to the vaccine.

They found that in Britain, for every 10 million people who might get the swine flu shot, about 22 cases of Guillain-Barre syndrome and 6 unexplained deaths will likely occur within 6 weeks of vaccination — and probably won’t be caused by the vaccine.

In the U.S., experts expect that for every 1 million pregnant women who get the swine flu shot, 397 will have a spontaneous abortion within a day.

Only if the rates of these events exceed these baseline numbers should experts suspect the vaccine might be responsible.

“People die every day for lots of reasons, but we tend not to think about that when a mass immunization campaign is happening,” said Steven Black of Cincinnati Children’s Hospital in Ohio, one of the paper’s authors. “We’re not saying we don’t need to look at vaccine safety, but let’s do it judiciously.”

Black, like several of the study’s authors, received grants from companies that make swine flu vaccine.

Mass immunization campaigns for diseases like measles and yellow fever have frequently been undermined by rumors that the vaccines cause dangerous side effects.

Still, rumors may also mask legitimate vaccine concerns. In Nigeria, fears that the oral polio vaccine causes HIV were unfounded but concern about the vaccine was not entirely unwarranted: it does cause polio in rare instances.

“The greatest danger ahead is that there will be coincidental events between (swine flu) vaccination and adverse health events and people will draw conclusions that are not based on science,” said Leonard Marcus of Harvard University’s School of Public Health, an expert not linked to the study.

Marcus said health officials must be vigilant in case any unforeseen side effects do pop up.

“When side effects happen to an individual, it’s devastating. And it’s human nature to want to link it to a recent vaccination,” Marcus said. “But it’s also possible to be compassionate without leaping to conclusions.”

Of the thousands of people so far who have received the swine flu vaccine worldwide, no side effects more serious than a sore arm, fever, or muscle pain have been reported.