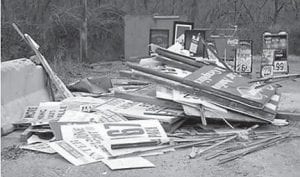 Signs placed illegally along state highways are being removed by state highway workers during a “sign blitz” that began on Monday and is expected to continue for several days.

Two or three times a year, state highway workers spend a week or two concentrating on ridding the roadsides of illegal signs. This year’s first Illegal Sign Blitz is under way in Highway District 12.

“You can get an intersection completely cleared of illegal signs,” said Darold Slone, operations branch manager, “and the next day they’re right back up, only worse. Especially if the weather is good. We’ll come to work on Monday from a nice weekend and just driving to the garage or the office looks like a different road than the one we left on Friday.”

District 12 maintenance workers have an ongoing directive to remove illegal signs from roadsides and intersections, particularly along four-lane roads and most state primary (twolane) roads. The district includes Letcher and six other counties: Lawrence, Johnson, Martin, Floyd, Knott, and Pike. The blitz attack started Monday (April 28) and will continue until all the illegal signs are removed.

In the interest of safety and maintenance, Highway District 12 workers routinely take such signs down. “We have had several ‘blitz’ programs over the past few years, warning people in advance and then spending an entire week or ten days taking down signs. By now people should know that putting signs on state right-of-way is illegal. We are just taking them down as we see them.”

If a sign is removed, it is taken to the nearest state maintenance garage and kept for a few weeks. Owners can get the signs back only if they agree to place them on private property, not public right-of-way. “We don’t have to keep signs or return them, so when we clean out the lot, they will be destroyed. We are not responsible for damage to any sign or sign post that we remove, since they were installed illegally to begin with,” Slone said.

Slone said he understands that businesses and individuals sometimes put a lot of money and work into these signs. “But the fact of the matter is, they create safety problems and it is our responsibility to make the roads as safe as possible. For one thing, illegal signs along the highways often cause sight-distance problems for motorists. They also interfere with ditch line cleaning and debris removal. Another concern is that they interfere with litter pickup and the operation of equipment used to mow shoulders and medians. Our spring mowing season begins on May 12, so our goal is to have all the illegal signs removed by then. Otherwise, the mowers will just mow them down.”

The Transportation Cabinet has a renewed emphasis on safety and beautification – quality of life issues that are important for all eastern Kentuckians. Removing signs that are illegally posted on state right-of-way is simply part of the job, Slone said, so people should not be surprised or angry when their signs come down.