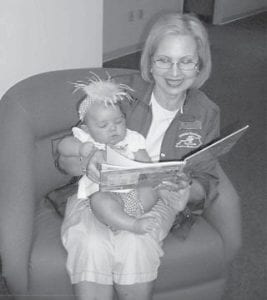 The Imagination Library in Whitesburg has enrolled its 150th child. Eight-month-old Lily Alexandra Hall is the daughter of Brandi and Nicholas Hall, and received the book “The Little Engine That Could”.

The Imagination Library is an early childhood literacy program, started by country music singer Dolly Parton. The Rotary Club sponsors the program locally. Children receive a free book each month until they reach their fifth birthday, regardless of family income.

The local program began in January 2012. Eligibility requirements are that the child be less than five years old and live in the Whitesburg 41858 Zip Code.

Approximately 700,000 children in four countries are receiving free books from the Imagination Library. For more information, contact Margaret Hammonds at 633-8200.