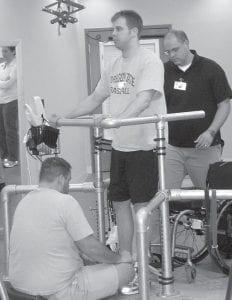 Rob Summers, center, receives intensive physical therapy in Louisville. Summers was paralyzed below the neck in a 2006 car accident and is now able to stand and move during therapy sessions with the stimulator turned on. (AP Photo/ Courtesy of Rob Summers)

After Rob Summers was paralyzed below the chest in a car accident in 2006, his doctors told him he would never stand again. They were wrong.

Despite intensive physical therapy for three years, Summers’ condition hadn’t improved. So in 2009, doctors implanted an electrical stimulator onto the lining of his spinal cord to try waking up his damaged nervous system. Within days, Summers, 25, stood without help. Months later, he wiggled his toes, moved his knees, ankles and hips, and was able to take a few steps on a treadmill.

“It was the most incredible feeling,” said Summers, of Portland, Oregon. “After not being able to move for four years, I thought things could finally change.”

Still, despite his renewed optimism, Summers can’t stand when he’s not in a therapy session with the stimulator turned on, and he normally gets around in a wheelchair. Doctors are currently limiting his use of the device, made by Minneapolis based Medtronic, Inc., to several hours at a time.

His case is described in a paper published in the journal, Lancet. The research was paid for by the U. S. National Institutes of Health and the Christopher and Dana Reeve Foundation.

“This is not a cure, but it could lead to improved functionality in some patients,” said Gregoire Courtine, head of experimental neurorehabilitation at the University of Zurich. He was not connected to Summers’ case. Courtine cautioned Summers’ recovery didn’t make any difference to the patient’s daily life and that more research was needed to help paralyzed people regain enough mobility to make a difference in their normal routines.

The electrical stimulator surgeons implanted onto Summers’ spinal cord is usually used to relieve pain and can cost up to $20,000. Summers’ doctors implanted it lower than normal, onto the very bottom of his vertebrae.

Harkema and her colleagues were surprised Summers was able to voluntarily move his legs. “That tells us we can access the circuitry of the nervous system, which opens up a whole new avenue for us to address paralysis,” Harkema said. She said prescribing drugs might also speed recovery.

Dr. John McDonald, director of the International Center for Spinal Cord Injury at Kennedy Krieger Institute in Baltimore, said the strategy could be rapidly adopted for the 10 to 15 percent of paralyzed patients who might benefit. He was not connected to the Summers case.

“ There is no question we will do this for our patients,” he said. McDonald added that since the electrical stimulators are already approved for pain relief, it shouldn’t be difficult to also study them to help some patients regain movement.

For now, Summers does about two hours a day of physical therapy.

“My ultimate goal is to walk and run again,” he said. “I believe anything is possible and that I will get out of my wheelchair one day.”