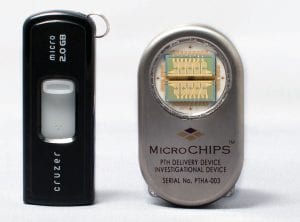 Scientists implanted a microchip in seven women that oozed out the right dose of a bone-strengthening drug once a day without them even noticing. The device (right) was photographed next to a computer “memory stick” for size comparison. (AP Photo/MicroCHIPS, Inc.)

Medication via remotecontrol instead of a shot? Scientists implanted microchips in seven women that did just that, oozing out the right dose of a bonestrengthening drug once a day without them even noticing.

Implanted medicine is a hot field, aiming to help patients better stick to their meds and to deliver those drugs straight to the body part that needs them.

But this study is believed the first attempt at using a wirelessly controlled drug chip in people. If this early stage testing eventually pans out, the idea is that doctors one day might program dose changes from afar with the push of a button, or time them for when the patient is sleeping to minimize side effects.

The implant initially is being studied to treat severe bone-thinning osteoporosis. But it could be filled with other types of medication, said co- inventor Robert Langer of the Massachusetts Institute of Technology.

“It’s like ‘Star Trek,’” said Langer, who co-authored the study that appeared Feb. 16 in the journal Science Translational Medicine. “Just send a signal over a special radio wave, and out comes the drug.”

Today’s medication implants continuously emit their drugs until they run dry. One example is a dimesized wafer that oozes chemotherapy directly onto the site of a surgically removed brain tumor, targeting any remaining cancer cells. Another is a contraceptive rod that is implanted in the arm and releases hormones to prevent pregnancy.

A next step would be more sophisticated implants that release one dose at a time, programmable to skip or add a dose as needed, said biomedical engineer Ellis Meng of the University of Southern California. Meng wasn’t involved with the MIT study but also is developing this kind of technology, and called Thursday’s report “an important milestone.”

Women with severe osteoporosis sometimes are prescribed daily injections of the bone-building drug teriparatide, known by the brand Forteo. But many quit taking it because of the hassle of the shots.

In the study, the microchip held doses of that drug inside tiny wells that are sealed shut with a nanothin layer of gold. Sending a wireless signal causes the gold on an individual well to dissolve, allowing that dose to diffuse into the bloodstream, Langer explained.

In a doctor’s-office procedure, the microchip was implanted just below the waistline into eight women with osteoporosis in Denmark. Testing found one microchip wasn’t responding to the signals. The other seven women had their implants programmed to automatically emit a oncea day dose beginning eight weeks later.

The chips could have begun working right away, said Robert Farra, CEO of Micro- CHIPS Inc., a Massachusetts company that has licensed the device and funded the study. But animal research showed a scar tissue-like membrane forms around the pacemaker-sized implant. So he waited until that blockage formed to signal the first of 20 once-a-day doses to begin, to see if the drug could get through.

Blood testing showed the implant delivered the drug as effectively as the women’s usual daily injections, and the device appeared to be safe, the researchers reported.

Farra said his company hopes to begin a larger-scale test, using a chip that can hold 365 doses, in 2014.