In Fox, NBA team will be getting ‘good guy’ 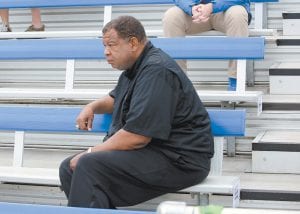 It would have been easy to make a phone call, send a text or make a post on social media to announce her verbal commitment to the Kentucky basketball program.

Junior Emma King of Lincoln County didn’t want to do that. She thought it would be more “special” for everyone if she went to Lexington to tell coach Matthew Mitchell face to face.

“That way I also got to visit them all (UK coaches and players). I love them all. It was a good excuse to go up there,” said King. “Plus, I wanted to see his reaction.

“I told him, he got up and gave me a big hug. He was just really excited, and so was I. At that time it was just me and my family in the office with him. But he went out and got everybody. They (the coaches) all came in. We took a ton of pictures. It was really fun.”

Blair Green of Harlan County is a 2018 UK commit. Her mother, Debbie, is her high school coach and was happy that King committed.

‘She will be a great addition for the 2019 class. Smart and talented girls are my favorite,” Debbie Green said. “Blair will be thrilled to have her as a teammate. I know coach Mitchell and staff are probably pretty happy right now

“I know she is a great 3-point shooter, has really good length at the guard spot and has a high basketball IQ.”

King’s high school coach, Cassandra McWhorter, was not surprised she decided to commit now even though she had numerous other offers along with interest from a lot of other schools.

“We have had many discussions during the recruiting process and I could tell her heart was set on Big Blue,” McWhorter said. “I know she has worked extremely hard for this moment.”

With two years of high school basketball left, committing now could relieve some pressure on King. She admits the recruiting process got stressful last year.

“I think it does in a way take pressure off,” she said. “It’s not something you want to get over with too quick but once you know, you know where you want to go and I know. I just didn’t want to waste any other coach’s time watching me and contacting me when I already know that is not what I wanted.”

One of the best parts of King’s play has always been her enthusiastic, aggressive play that often led to smiles on the court that were missing a lot last season.

“I definitely think her commitment to UK will relieve some of the pressure she felt last season during that recruiting process,” McWhorter said. “I have already witnessed a difference in her play this summer and can sense a bit of freedom in her game.”

Kentucky guard De’Aaron Fox should be one of the early picks in Thursday’s NBA draft. Kentucky coach John Calipari noted how when John Wall went to Washington as the No. 1 overall pick, the coach tried to tell everyone it takes more than one player to have a winning franchise.

Calipari said as the Wizards added more talent, Wall got better and better.

“Wherever he (Fox) goes, he’s going to be one piece and he will do his job and he will lead, but there isn’t anybody in this draft that’s going to go take a team and get them 15 more wins,” Calipari said. “Now, he may lead, if the team is tweaked and now you add him to some other guys, he can be a part of it, yes.

So what does a team get if it picks Fox?

“An unbelievable personality, will be great in the locker room, knows how to be a great teammate, is willing to share, will defer to someone else who has it going, has a tough wiriness to him,” Calipari said. “Because I looked at his legs when I saw him. When I recruited him, I was like, ‘Look at this dude’s legs. He can’t be this skinny.’

“Then all of a sudden he went out there and those skinny legs ran real fast and he’s tough. He’ll go in and get hit and banged, he’s fine. The thing about the 3-point shooting is the least of my worries with him. What I love is, if you want to pick up and play a little bit where they can’t just run your offense right down on top of you, he’s pretty good. And he has a per- sonality that will play in all these communities.

The last two years recruiting coordinator Vince Marrow had chances to leave Kentucky. Each time he listened to offers but decided to stay at Kentucky — and has had no second thoughts about doing so.

“Other places intrigued me a little bit, but I really liked it here and seeing this thing grow to where we finally have depth at a lot of positions,” Marrow said. “We had to really build this thing because we did not have depth when we got here.

“If I had went somewhere else and was watching the fruit of what we did here from afar, I would not have been happy. I know what they are going to do here. I am very happy here.”

Experience is a good thing for a college basketball team. Robert Vanderbilt, a former college assistant coach, understands that. But he also thinks Kentucky coach John Calipari can make up for a lack of collegiate experience with this year’s team that includes Jarred Vanderbilt, Robert’s son.

“He has got the type of players that are going to be hungry and play hard every day next season,” Robert Vanderbilt said. “These kids have been playing ball most of their life. Jarred play at the high school level since 7th grade. Talent can compete with experience and Cal is going to have plenty of talent to work with.

“You can have the best talent but if you can not coach them, you are not going to win. Cal knows how to coach guys that are high caliber talent.”

Jarred Vanderbilt is high caliber on and off the court. He was valedictorian of his graduating class and a National Honor Society member.

“We have always stressed academics first,” Robert Vanderbilt said. “You have to be academically sound as well as athletically sound. We stressed that a lot.”

Former Kentucky All-American receiver Derek Abney was impressed by what he saw of UK’s new facilities when he came back to Kentucky for the Governor’s Cup reception.

“Truly a commitment that the university has put into the program. It is a world-class facility. It is all right there. It is amazing. The different ways they handle nutrition from the way we did is amazing,” Abney said.

“Just the attention to every single thing is amazing. There was no stone left unturned to provide everything needed for a successful program.”

Little things Abney did not have at UK impressed him. He noted the “mud room” where players could put cleats and gloves “so they don’t mildew and stink” in the lockers.

“It was great to see the time and thought put into the new facility. Little things make a big difference and that’s how you have a successful program is by understanding that,” Abney said.

Even if Isaiah Briscoe is not drafted Thursday night, playing two years at Kentucky will still benefit him. Or at least that is what ESPN draft analyst Fran Fraschilla thinks.

“It will help him (playing at Kentucky), and where it will help him most will be if he isn’t drafted, which I think now is a flip of the coin that he will or won’t; there’s no doubt that he will be on an NBA Summer League roster soon after the draft,” Fraschilla said. ”And when he does play in the summer league with a particular team, he’s going to have every opportunity to prove that the experts were wrong, and because he played at Kentucky, because he played in big games and because he came in with a good reputation, teams have not forgotten about him necessarily but maybe they value him — I jokingly called somebody the other day a third-rounder, and by that I mean, yeah, someone like Isaiah Briscoe could get drafted in the second round. ”But even if he doesn’t get drafted, he’s going to be on an NBA Summer League roster and trying to prove that all of us experts were wrong and if he plays himself on to an NBA roster, then he’s going to be able to thumb his nose at everybody. So it’s not like he’s going into oblivion. He’s going to get the opportunity.”

Quote of the Week: “He gets his looks and smarts from his mother, not me,” Robert Vanderbilt on his son, UK freshman basketball player Jarred Vanderbilt.

Quote of the Week 2: “DeAaron has certainly created a buzz, not only because of his speed and the way he played this season, but he has a magnetic personality that at worst is going to sell a lot of shoes if he becomes a good player in the NBA; and at best, it’s going to make him one of the elite point guards in the NBA some day,” ESPN draft analyst Fran Fraschilla on former Cat De’Aaron Fox.

Quote of the Week 3: “He’ll either go two to LA or five to Sacramento. Doubt he gets past Sacramento,” former NBA draft analyst Ed Isaacson on UK’s De’Aaron Fox.