In honor of Truman Caudill 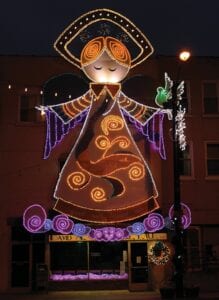 Downtown Whitesburg lights up for Christmas

My closest friend, when I was growing up on Blair Branch, was Truman Caudill. Actually Truman was my best friend off and on because his parents moved around a lot and often spent one or two years at a time in Indiana before his mom would move back home for three or four years while his dad would rent a room in a boarding house to stay up there and work.

Truman’s mom simply could not tolerate city living for any long stretches of time, but his dad had a better job than he could find in Kentucky and made monthly weekend trips back home. He also had ample vacation time to come home through the holidays and during the summer.

There was an old saying that the farther you went up Blair Branch, the meaner it got and Truman Caudill lived in the last house. There were a few times, before and even after Truman’s folks lived in their old place, when I lay claim to that dubious honor but I never lived up to it anywhere near Truman’s bent for mischief and even that was largely unearned. 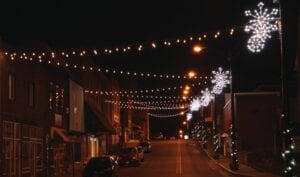 Christmas decorations in Whitesburg, and elsewhere in Letcher County this year, have never looked better, be it a magnificent angel on the office of Dr. David Narramore (top) or the lights decorating Main Street. (Photos by Carla Smith)

The fact of the matter was that Truman would give you the shirt off his back unless you happened to be a teacher he didn’t like and he didn’t like very many. The sentiment was mutual. If a teacher sat down on an upturned thumb tack, she didn’t even question the rest of us. Truman took the paddling and swore that hearing her scream when flesh connected with needle sharp tack was worth every lick of it.

One particular teacher had a paddle about 2 feet long and half an inch thick with holes drilled through the middle that spelled out BOARD OF EDUCATION. Truman took great pride in having the boys meet him at our outdoor toilet to see how many words we could find on his rear end when he dropped his pants. I don’t believe she ever caught onto the fact that, instead of punishment, she was giving him a badge of honor.

At Christmas I was often more anxious to see what presents Truman had received than I was in getting my own, more modest haul. Truman was an only child and, as previously mentioned, his dad had a good job with steady work. My dad was a miner and during the winter months his work often depended on whether or not coal trucks could get to and from the mines. Santa Claus’s financial position on Blair Branch usually depended on how well the mines were working. 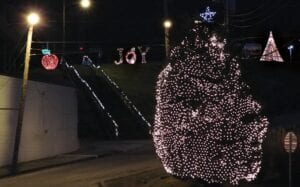 These decorations look over Whitesburg from on and near School Hill, near the business offices of Mountain Comprehensive Health Corp. (Photo by Carla Smith)

While my brothers and I were often thrilled with Tonka toys and new jeans, Truman usually had a new bicycle, the newest Daisy BB gun on the market, a shiny new bobsled or all three. We usually got to play with Truman’s stuff as much as he did. At least while it lasted, because Truman was rough on stuff. His mom used to say that he could tear up an anvil. His Christmas bike was often beyond repair before the weather was warm and dry enough for it to have a lot of utility on the muddy, rutted roads of Blair Branch, but he rode it anyway.

Truman was three years older than me and several inches taller. His widow, Margie, my classmate for 12 years, recently sent me an Internet photo of the two of us when I was about 10 and Truman about 13. In the photo he and I are standing side by side and I am wearing a pair of his hand-me-down jeans with the waistline pulled up nearly to my armpits. Loretta took one glance at the picture and said I looked like Urkle on the old TV show, Family Matters.

As Tom T. Hall might have said, “I thought he was a hero and I used to follow Truman around.” I simply can’t let December go by without fondly remembering my late, dear friend. It simply does not feel like Christmas without Truman Caudill in it.