In Memory of Pap 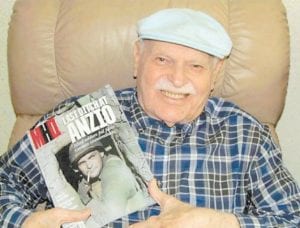 Through coincidence or fate, on June 5, 1944, during World War II, the Battle of Anzio ended but not before 43,000 allied troops were wounded or killed, over 4,500 enemy prisoners captured, and 136 days of battle had passed. My grandpa was one of those wounded and the Purple Heart displayed on his lapel paid tribute to that.

Although the battle is not nearly as recognized as Normandy, Pearl Harbor, Iwo Jima, or the Battle of the Bulge, for the men who fought, it was a battle nonetheless and by all accounts was one of the longest protracted battles of the war. Those who answered the call landed in reclaimed marshlands surrounded by mountains. The Germans had stopped the drainage pumps and flooded the marshes with salt water in hopes of killing the allied troops by epidemic alone. For weeks, shells rained on the beach, the marsh, the harbor and anything else observable from the surrounding mountains where the Germans were positioned. I imagine that those conditions make the hope of returning home seem as far away as the hope of seeing another tomorrow. Nonetheless, on the 74th anniversary of the battle’s end, we paid our last respects to a man who wholeheartedly deserved every recognition and honor that he received. 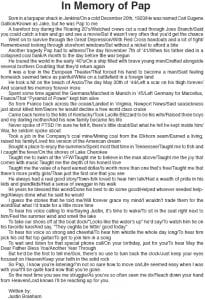 Tom Brokaw once said that Grandpa’s generation was the “Greatest Generation” and with the state of affairs as they are, I seriously doubt that the world will ever see another generation with the character that his displayed. It was at his service I recited a poem that I had written. Several people requested a copy. I have included it here in hopes of getting it to as many people that would care to have it. With that being said, I want to thank the community who came out and supported my family during this loss. We are thankful that these close knit communities still exist in these mountains and my grandpa would’ve been thrilled to have seen the support.