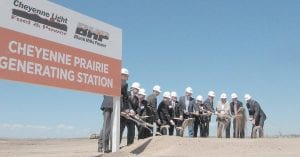 The next major power plant to be built in the nation’s top coalmining state will be fueled by natural gas.

Work on the 132-megawatt power plant — on track to be Wyoming’s largest gas-fired plant — began a few weeks ago. The $222 million plant will employ up to a dozen people once it’s finished next year.

“It’s impractical to even permit a coal-fired power plant, because within 10 years you’d have to get emissions down to levels equivalent to combined-cycle natural gas-fired power plants,” said Mark Lux, Black Hills Corp. vice president and general manager of power delivery.

The new plant will have three units, including two combinedcycle units that generate electricity with a gas-fired turbine plus a turbine driven by steam heated by the other turbine’s exhaust.

“This will be the cleanest, airemitting generating station in Wyoming once it’s constructed, in terms of the least amount of greenhouse gas emissions per megawatt,” Lux said.

The power plant is going up next to the city of Cheyenne’s Dry Creek wastewater treatment facility. Some of the water used in the power plant will be gray water from the treatment plant.

“When we consolidate multiple facilities onto a single complex like that, it provides advantages certainly over constructing separate facilities,” said Mark Stege, vice president of operations for Cheyenne Light, Fuel & Power.

Wyoming is the third-ranked state for natural gas production but first for coal production. More than 40 percent of the nation’s coal comes from Wyoming.

Many utilities, however, are turning away from coal in favor of gas, which emits half as much carbon dioxide when burned. Black Hills Corp. is building the Cheyenne power plant while preparing to retire the 22-megawatt Neil Simpson I plant in Gillette, the 34.5-megawatt Osage plant in Osage, and the 25-megawatt Ben French plant in Rapid City, S.D., next year.

“Economics is driving that. We could retrofit those plants,” Lux said. But “the economics for our customers is much better suited to building this project here in Cheyenne.”

The only other large power plant project technically under construction in Wyoming right now is the 300-megawatt Two Elk plant east of Wright, according to the Wyoming Department of Environmental Quality.

The Two Elk plant would burn low-grade coal and timber killed by pine beetles. The project, run by Greenwood Village, Colo.-based North American Power Group, has been delayed several times since the company announced the plant in 1996 and planned to begin producing power in 1999.

The company now plans to finish the Two Elk plant in 2016.