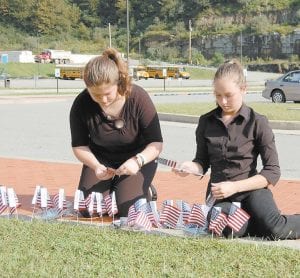 Sisters Kristen and Halie Moushon, both students at Letcher County Central High School, placed American flags in front of the high school Sunday to commemorate the 10th anniversary of the terrorist attacks on New York City, Washington, D.C., and in Pennsylvania on September 11, 2001. (Photo by Sally Barto)