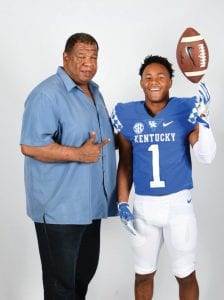 Wandale Robinson admits he’s enjoyed the attention he’s received because he’s being recruited by the University of Kentucky.

The Western Hills speedster is one of the top players in the state going into the 2018 season and has been on Kentucky’s recruit- ing radar for some time. But that attention has increased since recruiting coordinator Vince Marrow became the lead recruiter for in-state players.

“It’s nice being the guy UK is recruiting and the attention that goes with it,” said Robinson, who has been laser timed in 4.4 seconds for the 40-yard dash. “But then it goes back to what happens if I choose a different school. I don’t know how the fans would react then. Kentucky has been recruiting me hard since they started recruiting me. Once other schools offered, they probably have even recruited me a little more.”

Robinson knows Kentucky has a talented group of senior high school football players but admits he would like to be named Mr. Football. Last year’s winner, Danville’s D’Maurie VanCleave, was a similar type player. Robinson is a bit taller at 5-9 and a bit heavier at 170 pounds, but both have the same speed and game-breaking ability. VanCleave was the first Danville player to be named Mr. Football. Robinson would be the first at Western Hills if he won.

“Mr. Football would be a big deal, not just to Wandale, but for this school,” Western Hills coach Don Miller said. “Obviously, numbers speak for what he has done just like numbers did for Van- Cleave. Like VanCleave, he’s also an impact player for us on defense. He does not come off the field. He’s out there for offense, defense, special teams even though not a lot of teams kick to him.”

Robison said winning Mr. Football was a goal he set even before he started playing high school football.

“Me being a heavily recruited guy might help with that, too. I always want to prove I am the best and will do what it takes to be the best,” Robinson said.

“No matter what sport I played, I wanted to be the best,” Robinson said.

That competitive nature is something Marrow likes to see in athletes. Robinson said the UK recruiting coordinator treats him “like a son” and he appreciates that.

“It’s more like a son deal and bonding that way than it is a player and coach relationship with him,” Robinson said. “It’s more man to man, and I like that. We’ve been though some similar things. With them being the home state school and being able to play in front of family and friends, that’s a big thing. They were like three plays away from being a 10-win team last year. They are getting good and getting better players every year.”

“Most people see Duke as an academic school that is just average in football,” Robinson said. “But they are up there now with coach Cutcliffe. They were like my seventh offer, so they have been with me a long time.”

Robinson really has not narrowed his college choices yet and has not made any firm plans for where he might visit or go to camp this summer. However, he does plan to make a college choice before his senior season starts in mid-August.

“I will just sit down with my mom and people I am close with and decide some stuff,” he said. “A lot of schools preach what I want to hear. I understand that. I have to sit down with my family and figure out what is best for me. But I plan to be committed before my season starts.”

He also plans to enroll in college early by graduating in December, something Western Hills does allow.

“A lot of college coaches like that. That’s why I am already on the road to graduating in December,” Robinson said.

No matter what kind of adversity shortstop Katie Reed faced — and there wasn’t much because she’s so talented — this season it never worried coach Rachel Lawson that it would have any long-term impact on her junior shortstop.

“The coolest thing her being a hockey player (in St. Louis growing up) is she knows how to get smashed and get up and come back harder and give it to somebody else,” Lawson said. “I like that.

“She is such a physical player. Her natural makeup is to get up and get after it no matter what happens. She thinks about all kinds of things. She analyzes mistakes and works hard to get it right moving forward.

“She doesn’t make many mistakes, but if she does, you know it won’t lead to another mistake. She’s too competitive for that. She’s just somebody I know will never let anything get her down.”

Chris Johnson can remember when his youngest son, Keldon, was a little boy and would be playing basketball outside — sometimes when the temperature was close to 100 degrees — and had to be forced to quit playing before he would come inside.

“No matter how hot it was, he wanted to keep playing,” Chris Johnson said. “His work ethic was just amazing. We were truly blessed with how hard he wanted to work to be the best player he could be.”

Keldon Johnson’s two older brothers did their part to make him a better player, too.

“They kind of beat up on him in the yard. I would send him right back out if he came in crying and complaining,” Chris Johnson said. “Then one day my oldest son, who is now 23, ended up coming in the house crying. After that, Keldon never came back in crying. I’m still not exactly sure what happened that day.”

After signing with Kentucky, Keldon Johnson admitted the story was true about his brothers beating up on him.

“As I got bigger, I got tougher. I had to have an edge and keep fighting and pushing. They would push me on the ground, walk over top of me. Things like that to try and make me tougher. I had to be tougher,” the UK signee said.

“Dad was not sympathetic at all no matter what they did. He sent me right back outside to play. He never really babied me. He told me to go back out there and keep playing and that I just had to find a way to compete.”

He started playing with them when he was about 7 years old. He had to find a way to compete with them, one reason today he’s a physical player who doesn’t mind a defensive challenge.

“I am definitely the physical player I am today due to playing with my brothers in the back yard. They pushed me around, so now I push other people around. Seems only fair to me,” he said and laughed.

How does a girl from Inez, Ky., who grew up a University of Kentucky sports fan end up in New York City playing country music?

For Annalyse McCoy, it’s a journey she has enjoyed and continues to enjoy even more now with the opening of the Opry City Stage — first-ever satellite location of country music’s highly regarded Grand Ole Opry in Nashville — on Broadway in Times Square.

“I grew up singing country music and doing musical theater as well. I went to school (for theater at Northern Kentucky University) and decided that New York had it all — acting, singing, playing music. But I never knew New York would get such a blossoming country music vibe. I was probably a little naive and also a little too confident to know better than to come to New York.

“I had visited New York a few times growing up. My parents were always very supportive and helped us see other parts of the world. But moving from Inez to New York was quite a change. It’s hard to make a living and hard to rise above the crowd.”

There’s also one other interesting note for Kentuckians here — she is a direct descendant of the McCoys of eastern Kentucky who feuded with the Hatfields. She says she grew up listening to stories about the feud and had a book at her house with the story of the McCoys passed on from her grandparents.

“It’s interesting to be part of that history. It was quite a bloody story at time,” she said. “It still comes up a lot when I am talking to people. I actually wrote a song (‘It’s in the Blood’) from the point of being a McCoy and being part of the tradition and pride of where you come from.”

She went to Northern Kentucky University on a theater scholarship, but her mother, father and brother all graduated from UK.

“I am definitely a UK fan, too,” she said. “I don’t get to go to a lot of games now, even when they play (basketball) up here because of our schedule. One of my best memories was back in 2012 when my family was visiting and we all went out and watched UK (on TV) win in the Final Four. But UK is definitely a big part of my family.”

Kentucky will be playing Seton Hall in Madison Square Garden Dec. 8th. “Annalyse & Ryan” do not have shows scheduled yet for the fall and winter, but the Opry City Stage has other performers with country music ties to Kentucky. However, if it worked out that that McCoy, a life-long UK fan, was performing that weekend it would be a perfect side trip for UK fans going to the game.

“That would be great. We’ll just see what happens,” McCoy said.

Quote of the Week: “I like how he keeps his legs moving and takes on contact. I like the way he runs inside. A lot of running backs do not like to go inside, especially in the SEC. They like to try and bounce outside and use their speed but everybody is fast in the SEC. You have got to take it between the tackles and he’s not afraid to do that or shy about the contact,” former UK running back George Adams, a former NFL first-round draft pick, on UK junior Benny Snell.

Quote of the Week 2: “You have to process what you want to do with the rest of your life. Maybe the football competition is not as high in the Ivy League as some other spots but you can go play in the Ivy League and still play in the NFL. It’s not the school that sends you to the NFL. Your play sends you to the NFL,” Louisville Manual running back Aidan Robbins on comparing offers from Ivy League teams to those in the SEC.