Nice to know them 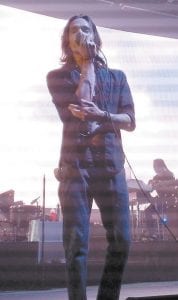 In the late Nineties, a southern California band burst onto the alternative scene. Known as Incubus, the band was noted for having a hard-edged funk-rock sound. Almost 17 years later the band has released 11 albums, including its latest, If Not Now, When? Now on a highly anticipated North American tour, Incubus made its 11th stop at Cincinnati’s Riverbend Music Center earlier this month and gave the show of a lifetime.

As the concert started, legendary DJ Chris Kilmore took his place at the band’s turntables. The crowd then grew silent in anticipation before hearing the band’s signature record scratching as the rest of the five-man band, including front man Brandon Boyd, took the stage.

Incubus began the set with the hit “Pardon Me,” then shifted into songs such as “Wish You Were Here” and “Promises, Promises.” Band members took very little time talking between songs to ensure they were fitting in as many hits as possible.

The band performed a 20-song set list to many more fans than just those sitting at the venue. Over the years the band has created a system where you can watch a live feed of the show on the Incubus website.

After finishing 15 songs the crowd was as vibrant as ever when the band started singing its Billboard chart-topping song, “Drive,” where during the final chorus Boyd turned the microphone to the crowd and let the audience carry out the last few sentences of the song, “Whatever tomorrow brings I’ll be there with open arms and open eyes.”

After the band played its 18th song, all five members left the stage. Most people doubted an encore would occur, because the band had already burned through all of its hit songs and had just performed “Nice to Know You,” which would have been an appropriate finale. But to the astonishment of the crowd, Incubus came back out for an encore and performed the little known song “ Tomorrow’s Food.” The song centers on the story of growing old and the mortality of human beings themselves. Even though the song was unheard of by most of the crowd, by the end of the show it was one of everybody’s favorite.