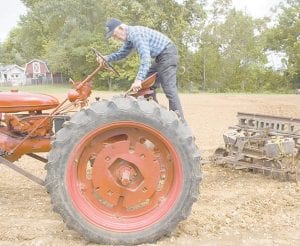 John Siscel Jr., 87, climbs up the back of his 1950’s era Farmall Super C tractor and prepares to till land in the backyard of his home on the west side of Evansville, Ind. A triple bypass and two knee replacements later, Siscel takes advantage of any opportunity he has to farm, relying on older farming equipment handed down by his father. (AP Photo/The Evansville Courier & Press, Molly Bartels)

A triple bypass and two knee replacements later, 87-year-old Evansville resident John Siscel Jr. takes advantage of any opportunity he has to farm, relying on older farming equipment handed down by his father.

Siscel’s farming roots stretch from his school days when he helped his grandfather to his modern-day work on about an acre of ground on the West Side.

“Growing up, when I was a kid, I helped grandpa first,” Siscel said. “I used to take my vacations out of school and help him on the farm.”

When Siscel moved to Evansville about 1953 with his wife — who died from leukemia in 1977 — he would ride his bicycle nearly 50 miles on the weekends to help his father with a farm in Troy, Ind. Back then, Siscel’s wife would help can the vegetables to keep plenty in stock for winter meals.

“Our basement used to be full of canned goods,” said his daughter, Linda Siscel. “It was a family thing. It was the way our family stuck together.”

The tractor that Siscel uses to this day is a 1953 International Harvester Mc- Cormick Super C Farmall. It’s a hand-me-down used by his father.

“I was 10 years old or so when my grandfather bought this tractor,” Siscel said. “I drove it back to the farmhouse after he bought it in an auction. I remember the day my grandfather gave it to my dad, and he was in tears to see the tractor leave.”

Before Siscel inherited the tractor, he relied mostly on tillers to farm his crops.

“I finally got an old farm plow and hooked it to the back of (the tractor) first before I got the big equipment,” he said. “I took the old-fashioned plow and plowed my garden up first before I got all the other stuff from my dad when he passed away.”

“I’d do the same thing if I had a million-dollar tractor out here,” he said.

However, Siscel is impressed with the modern technology.

“They can do so many rows with the big equipment,” he said. “That new equipment, you wouldn’t have to go around (this field) but maybe twice, they’re so wide.”

Siscel says the physical aspect gets harder every year.

“If this guy passes away out here in this garden, he died doing what he wants to do,” said Siscel’s son, John Siscel III.

Every year, Linda Siscel takes photos from the beginning of the farming season until everything is out of the garden, she said.

“Without those pictures, I won’t have any memories,” she said. “… My dad is my life.”