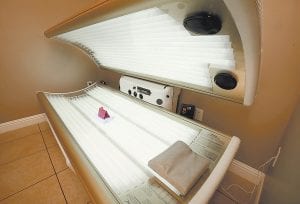 Indoor tanning injuries have declined but still sent more than 1,000 people to emergency rooms in recent years. Here’s a look at what’s billed as the first national estimate on these injuries, from the federal Centers for Disease Control and Prevention:

The CDC analyzed 10 years of national injury data and counted more than 6,000 indoor tanning injuries treated in emergency departments in 2003. The number fell pretty steadily after that, to about 2,000 in 2012. Most injuries were burns, but they also included fainting and eye injuries. Most occurred in tanning salons and most people didn’t require hospitalization.

Millions of Americans use indoor tanning devices or salons each year. Young adults and teen girls are the most frequent users; according to CDC data, that includes more than one in four 12th grade girls. A tanning industry spokesman said that given the popularity of indoor tanning, the study suggests an injury incidence rate of a tiny fraction of 1 percent. “That is a safety record all industries should strive to achieve,” said John Overstreet, head of the Indoor Tanning Association.

The CDC says burns severe enough to require ER treatment indicate overexposure to UV radiation. Manufacturers are required to install timers to limit exposure, but the CDC study found some patients had fallen asleep while tanning.

The CDC and others caution that just like tanning outside, indoor tanning is linked with skin cancer, including the deadliest kind.