By ALISON LADMAN For The Associated Press 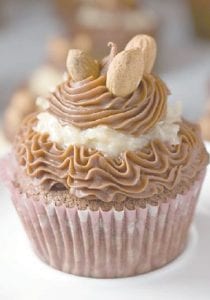 If you sometimes feel like a nut, this may be the cupcake for you. Inspired by the Almond Joy candy bar, these cupcakes feature a rich chocolate cake filled with sticky coconut topped with a luscious milk chocolate ganache and almonds.

Not feeling nutty? Go for a Mounds-inspired version. Leave off the almonds and use dark chocolate instead of milk chocolate. Decrease the amount to 16 ounces of chips for the same consistency.

To make the ganache, in a small saucepan over medium, heat the cream to a rolling boil. Be careful not to let it overflow.

Place the chocolate chips in a medium heat-safe bowl. Pour the hot cream over the chips. Tap the bowl on the table to settle the chips into the cream. Let sit for 2 minutes. Gently stir the mixture until it is homogenous and the chips are melted. Refrigerate for several hours, stirring occasionally, until quite thick.

Meanwhile, prepare the cupcakes. Heat the oven to 350 F. Line 18 muffin tins with paper liners or spritz with cooking spray.

In a small bowl, mix the cocoa powder and boiling water. Set aside to cool.

In a small bowl, mix together the eggs, 3 tablespoons of water and vanilla.

In the bowl of a stand mixer, sift together the flour, sugar, baking powder, baking soda and salt. When the cocoa mixture has cooled, add it and the softened butter to the bowl, then beat on low with the paddle attachment until combined.

Increase the mixer speed to medium and beat for 1 1/2 minutes. Add the egg mixture in 2 additions, mixing and scraping down the sides of the bowl in between.

Divide the batter between the prepared muffin tins and bake for 20 to 25 minutes, or until a toothpick inserted at the center comes out clean. Transfer to a wire rack to cool.

While the cupcake bake, prepare the filling. In a skillet over low, combine the sweetened condensed milk and the coconut. Cook, stirring continuously, for about 10 minutes, or until the milk starts to hold its own path when a spoon is dragged across the bottom of the pan. Set aside to cool.