Injured dog, owner are reunited after ad appears in newspaper 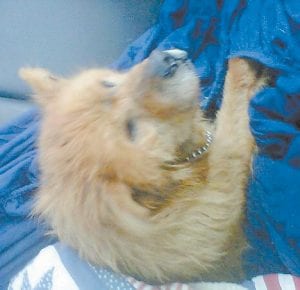 Pooh Bear, 15, was reunited with his owner after his rescuer placed in ad in The Mountain Eagle.

An injured dog was reunited with its owner after the owner responded to an ad placed in The Mountain Eagle.

The 15-year-old dog, which is mostly deaf and a little blind, was hit May 1 by a truck pulling out from the street located between the office of Assistant Letcher Commonwealth’s Attorney Jenna Watts and the Letcher County Courthouse.

“He was hit once, and instead of stopping the truck just continued driving and the dog was run over by the back tires,” said Watts.

Watts took the dog to Beaver Creek Animal Clinic in Floyd County. The dog has no long-lasting injuries and is stiff and sore, Watts said. The dog was still at the clinic May 7 because he wasn’t walking yet.

Watts posted a notice about the dog on the social networking site Facebook in an effort to locate the owner. No one came forward to claim ownership of the dog so Watts placed an ad in The Mountain Eagle.

The owner saw the ad and had her son contact Watts.

“She didn’t have Facebook and none of her friends have Facebook so without The Mountain Eagle she may have never found him,” said Watts.

The dog, whose name is Pooh Bear, has lived his entire life with the owner.

“He was on the carport one night when some dogs were hanging around and he went missing the following morning when he got hit,” said Watts.