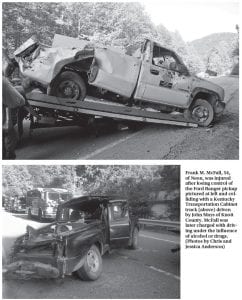 Police say alcohol and drugs contributed to the cause of a wreck at Payne Gap on June 2.

Frank M. McFall, 54, of 934 Goose Creek Road, Neon, was charged with operating a motor vehicle under the influence of alcohol or drugs and possession of an open alcoholic beverage container in motor vehicle.

Lt. Brian Damron of the Letcher County Sheriff ’s Department said McFall was driving a 2001 black Ford Ranger pickup truck around 5:50 p.m. on June 2 when the vehicle dropped off of the roadway while traveling northbound on US 119.

The Kentucky Transportation Cabinet truck was being driven by John Mays, 63, of Holly Bush in Knott County.

Members of the Jenkins Volunteer Fire Department extricated McFall from his vehicle. McFall, Mays and Slone were transported to the Whitesburg Appalachian Regional Healthcare hospital where they were treated and released.

Damron, who has charge of the investigation, wrote in a citation that he could smell what appeared to be alcohol on McFall’s breath after he was removed from his vehicle. Damron also wrote that McFall stated in the Whitesburg emergency room that he took hydrocodone tablets and that he had taken three earlier that day.

An arraignment date has not yet been set for McFall.