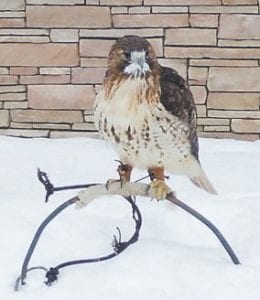 NAME THAT BIRD — The Letcher County Extension Office needs help naming this female red-tailed hawk which was found injured in Sandlick last month. The tip of her right wing was amputated and she will spend the rest of her life being cared for by Mitch Whitaker, a master falconer and licensed rehabber, who works at the Extension office.

The Letcher County Extension Offi ce is sponsoring a contest to name a female red-tailed hawk who was found here severely injured.

The bird, which was found in a Sandlick backyard in December, is the first hawk to be cared for through the Extension office’s rehabilitation program.

“We wanted to do it to fill a need,” said Whitaker. “We thought it was a perfect fit for us.”

Whitaker is the maintenance supervisor at the Extension office and will work closely with the 4-H program to teach students how to take care of fowl.

“If one gets hurt, it is our duty to help them out,” he said.

Whitaker has given several pre- sentations at area schools to teach students about hawks, owls and other wildlife. His goal is for high school students to learn how to help feed and care for the hawks at the Extension office.

He said when an injured bird is found, it must be released within 180 days, be euthanized, or be accepted into a rehabilitation program.

“We commit to feeding them for life,” said Whitaker.

The hawk was injured so badly that Dr. Gene Smith, of the Appalachian Animal Hospital in Hazard, had to amputate the end of its right wing from the wrist out. The hawk won’t be able to fly and will spend the rest of its life living at the Extension office.

Whitaker estimates the red-tailed hawk to be about four years old, based on the color of her eyes and plumage. Hawks live about 20 years although one out of four doesn’t make it through the first year.

Whitaker plans on taking the red-tailed hawk to schools to let students see a hawk up close. He and others at the Extension office have also been taking care of a barred owl named Endora, which came from the raptor program in Somerset. The tame owl also has a broken wing and cannot fly well enough to survive in the wild. Whitaker has already taken the owl to a few schools.

Whitaker has also cared for a pileated woodpecker, a grebe, and baby ducks.

To suggest a name for the red-tailed hawk, call the Letcher County Extension Office at 633-2362. The winner of the contest will receive six chocolate-covered strawberries from the 4-H Teen Council. Deadline to submit a name is Feb. 1.