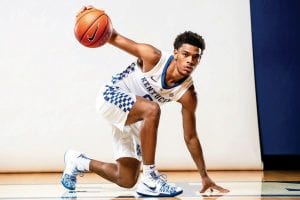 Experience and better health could add up to a big season for Quade Green. (UK Athletics photo)

Quade Green endured a lot of painful hardships during his freshman campaign.

The sophomore guard overcame an eye injury and a back injury, adding to his struggles as a freshman. He said the eye injury wasn’t a discouragement, but said the back problem dealt him a bigger setback.

“I think the back injury set me back more than anything,” he said. “I think that that messed up the whole groove of my game. … It was my sciatic nerve from my right side was messed up so I had to get that right. It was very painful. I couldn’t get out of the bed some days. It was painful.”

To move past the back injury, Green took therapy three to four times a week and didn’t sit. Green has moved past the injury and is expecting to build on last year’s experiences.

Green insists there was no learning curve for him and accepted the work it took to get better from the beginning to the end of the season.

“It was a grind (and) you have to put the work in,” he said. “Do what the man upstairs tells you to do and coach (Calipari) tells you. Help him and he helps you, really, and help the team win and that’s all there is to it.”

He did admit however, that last season was a struggle and took its toll and said his biggest issue was communicating and getting on the same page with Kentucky coach John Calipari.

“I think that comes when you come from high school to first year of college. I think it was kind of hard. We had the miscommunication or some parts of it on each other’s end. But other than that, I did whatever he wanted me to do. Me and him came to a conclusion, fixed it. Now he wanted to do this (penetrate more) and I’m going to help him and it’s going to be good.”

He also doesn’t mind having more competition in the backcourt that, he said, is filled with guards “for days.”

In order to avoid contact on a consistent basis when penetrating to the basket, Green has added a new dimension to his game and improved his craft.

“This is where the jump shot comes in handy with the fourfoot floaters and you don’t have to go all the way down there with the big guys and have a collision,” he said. “You might get hurt and I (already) messed my back up doing that. I’m going to go down there and I may get hit sometimes, but to prevent that, I’ll have to do it on a regular basis. Pull up jump shots and that’s it. You’ve don’t worry about other collisions and worry about my messing my back up.”

Now that Green knows what to expect, he plans on stepping back and having more fun this season.

“I’m enjoying this process better now. Last year was a struggle for me, really,” he said. “But this year I know what’s happening and I know what is going on and what coach is looking for. I’m going to have fun with this and be competitive.”