By VICTORIA MARTY The Gleaner 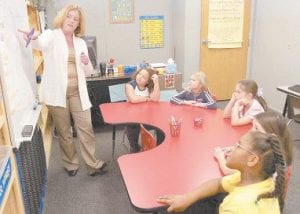 For Henderson teacher Rachel Ray, words are a type of glue tying one math concept to another. That’s why she listens – really listens – when her students explain how to illustrate double digits with words before they even try to count them out with their hands.

Finding various ways to depict the number 12 might be easy for adults. But the roughly 30 students at South Heights Elementary School who have been targeted for additional math instruction haven’t reached that point in their education.

For them, the number 12 might still be somewhat of a mystery. And that’s where the Primary Mathematics Intervention Initiative comes in.

“We do an activity as a group or in pairs,” Ray said of the program, which at this point is in the final year of a two-year, $130,000 total grant at the school. “And when we finish, we talk a lot about math. If they make a mistake, they get to explain how they figured out their answer. That is how I get to see how they think.”

That means Ray spends just as much time talking about vocabulary as she does teaching her students that there are multiple ways to solve a problem. Take the assignment to find different ways to portray the number 34.

Those are the answers Ray likes to hear. The kids are starting to figure out what makes up the number 34, what creates the number – what it is to be 34.

But it’s clear, from the way the five girls in her 45-minute class hesitate, that they don’t all understand the assignment. That means the lesson isn’t over, even if that day’s session is. But that’s all right, since the students seem to like being in the class.

“The main thing is … it’s a safe environment,” Ray said. “They feel comfortable where they can make a mistake and not have a meltdown. I usually hear that the kids have increased confidence and that they are more willing to participate and take a risk to think of another way to solve a problem.”

Funded by the Kentucky Department of Education, the program has helped some schools solve their problems, too. And the hope is that its teachings may continue at South Heights even after the grant funding ends, Ray said. The funding itself has gone to pay for Ray’s salary, travel expenses, training, curriculum, technology and other needs to implement the two-year program.

First-graders statewide who were part of the program scored higher than 49 percent of all students. Since these students started the year scoring higher than only 7 percent to 8 percent of all students, the gains are dramatic, the Kentucky Center for Mathematics said. They also mean that an early focus on numbers is beginning to get as much attention as early literacy, the Center said.

“We couldn’t be more pleased with these results,” said Alice Gabbard, director of diagnostic intervention for the Kentucky Center for Mathematics. “We hope for continued support to sustain this program because it is desperately needed for building a foundation in numeracy that will allow all Kentucky students to excel.”