By LINDA A. JOHNSON The Associated Press 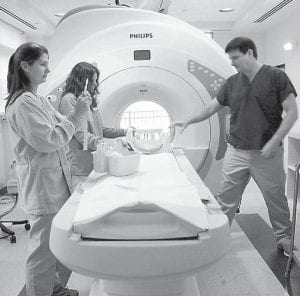 Insurance companies are taking a harder look at advanced medical scans like MRIs, citing spiraling costs and safety concerns. And some doctors agree there’s emerging medical evidence that many of these scans are being over-prescribed. (AP Photo/New Jersey Herald)

Insurance companies are taking a harder look at advanced medical scans like CT scans, citing spiraling costs and safety concerns. And some doctors agree there’s emerging evidence that these scans are being overprescribed.

Health insurers are requiring more pre-authorizations before patients can receive these scans, and setting other restrictions including mandating that the imaging equipment and medical staff operating it be credentialed in advance.

Insurers fear some patients are being exposed to dangerous radiation levels from having repeated CT and PET scans, which use many times the radiation of a regular chest X-ray. Sometimes scans are repeated because the first ones were not done properly, using outdated equipment or by poorly trained technicians.

Doctors, too, are concerned about patients getting excessive radiation exposure when they receive scans that aren’t needed or are ordered as “defensive medicine” to protect against possible lawsuits. There also is concern that a small number of unscrupulous doctors without adequate expertise are referring patients for tests in their own offices or imaging facilities in which they have a financial interest.

“There is a definite concern that in-office imaging could lead to scanning for dollars,” said Dr. Robert Hendel, a heart specialist who sits on American College of Cardiology panels focused on quality and appropriateness of imaging.

But doctor experts say the bigger problem with medical imaging tests is the insurance red tape needed to get them.

“Is this a preauthorization process or are these (insurance) companies practicing medicine?” asks Dr. Arl Van Moore, board chairman at the American College of Radiology, the specialists in medical imaging.

Moore cited another reason for increasing costs: Doctors sometimes order a diagnostic test that doesn’t need preauthorization – even if it pro- vides less-helpful information than the one they prefer – then seek approval for a more advanced test if the first one shows it’s needed.

Worse yet, sometimes patients end up getting a riskier, more invasive test than what they really need, said Hendel. For example, cardiologists wanting to assess blood flow and blockages inside a patient’s heart arteries would prefer a nuclear cardiology test. With that, a small amount of a radioactive substance is injected in the blood and tracked using a camera.

Some doctors will instead order a cardiac catheterization, which doesn’t require advance authorization, Hendel said. But that involves threading a catheter through a blood vessel up into the patient’s heart – and carries a 10-times higher risk of complications such as a heart attack or stroke, he said.

The two doctor specialist groups are fighting improper use of scans by supporting accreditation of the machines and doctors using them and by publicizing criteria for quality and appropriateness of various imaging tests.

“There is substantial evidence that these types of techniques, when used appropriately – and I want to emphasize the word ‘appropriately’ – can keep the lid on expenses and improve outcomes,” such as by catching cardiac problems early enough to prevent a heart attack, Hendel said.

Patients who are inconvenienced tend to blame the doctor and office staff, Hendel noted.

“They (patients) show up expecting a test to be performed. We’ve booked a slot,” and then discover the problem, Hendel said. “We have no choice but to reschedule. Are they upset? Yes!”

He said use of strategies to hold down imaging costs was fairly limited until last year, when it really ramped up, triggering the growth of a new industry of insurance consultants called radiology benefit managers.

A recent study by the Center for Studying Health System Change, which is funded by the Robert Wood Johnson Foundation of Plainsboro, N.J., the nation’s biggest health care charity, also found that limitations on use of MRIs, CT scans, PET scans and nuclear cardiology imaging became widespread last year. The report was based on visits and interviews in 2007 with officials of health plans, hospitals, doctors’ practices, major employers and others in 12 metropolitan areas.

The report noted use of CT scans in the U.S. nearly doubled between 2000 and 2005, from 12 scans per 100 people to 22 per 100. That’s partly because improved technology has made the imaging machines, which can cost $1 million to $2 million each, useful for diagnosing more problems.

“The hospitals and physicians purchase it, and then there’s a strong incentive to use the equipment,” said Ignani, the insurance trade group CEO, adding that manufacturers aggressively market the machines.

Revenues from the tests, which can run $500 to $1,000 or more apiece, can be tempting to financially struggling hospitals and doctors squeezed by shrinking reimbursements from government health programs and commercial insurers. At least one medical education firm is pitching a training conference titled: “Practice Expansion for Primary Care Physicians: How to Grow Your Income by Adding In-Office Imaging!”

The insurer restrictions seem to be working: After one health plan that was seeing 20 percent annual jumps in advanced imaging use began requiring preauthorization, its growth rate plunged. Yet the insurer said only 1.5 percent of requests were being denied, indicating doctors were ordering fewer tests, according to the report.

Insurers are looking at ways to put similar restrictions on other high-cost areas, and some already are doing so for stomachreduction surgery and very expensive medications, she said.

Doctors see some hopeful signs, though, after passionate arguments by physician groups reversed changes they were fighting.

The Medicare program is trying to find ways to hold down its spending on imaging services after the annual cost jumped from $6 billion in 2000 to $12 billion in 2005. It had proposed no longer paying for cardiac CT scans unless patients were enrolled in a study of their effectiveness. In mid-March, it said it would continue to cover the scans.

And Horizon Blue Cross Blue Shield of New Jersey, the state’s biggest insurer, recently halted a plan to require preauthorization for relatively inexpensive EKGs, or echocardiograms, even though it is starting to require advance approval for expensive cardiac imaging.