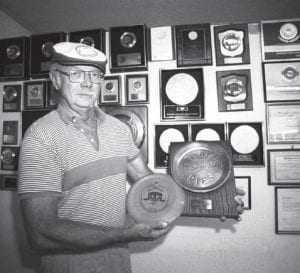 The first Frisbee rolled off the assembly line this week in 1957. In photo above, inventor Ed Headrick of Lakeport, Calif., holds a Frisbee and its prototype, a Mother Frisbie’s pie tin, in 1985. Headrick, father of the modern Frisbee and designer of Wham-O’s first “professional model” flying disc, died in August 2002. He was 78. (AP Photo)

On this week in 1957, machines at the Wham-O toy company roll out the first batch of their aerodynamic plastic discs– now known to millions of fans all over the world as Frisbees.

The story of the Frisbee began in Bridgeport, Connecticut, where William Frisbie opened the Frisbie Pie Company in 1871. Students from nearby universities would throw the empty pie tins to each other, yelling “Frisbie!” as they let go. In 1948, Walter Frederick Morrison and his partner Warren Franscioni invented a plastic version of the disc called the “Flying Saucer” that could fly further and more accurately than the tin pie plates. After splitting with Franscioni, Morrison made an improved model in 1955 and sold it to the new toy company Wham-O as the “Pluto Platter”–an attempt to cash in on the public craze over space and Unidentified Flying Objects (UFOs).

In 1958, a year after the toy’s first release, Wham-O–the company behind such topsellers as the Hula-Hoop, the Super Ball and the Water Wiggle–changed its name to the Frisbee disc, misspelling the name of the historic pie company. A company designer, Ed Headrick, patented the design for the modern Frisbee in December 1967, adding a band of raised ridges on the disc’s surface–called the Rings–to stabilize flight. By aggressively marketing Frisbee-playing as a new sport, Wham-O sold over 100 million units of its famous toy by 1977.

High school students in Maplewood, New Jersey, invented Ultimate Frisbee, a cross between football, soccer and basketball, in 1967. In the 1970s, Headrick himself invented Frisbee Golf, in which discs are tossed into metal baskets; there are now hundreds of courses in the U.S., with millions of devotees. There is also Freestyle Frisbee, with choreographed routines set to music and multiple discs in play, and various Frisbee competitions for both humans and dogs–the best natural Frisbee players.

Today, at least 60 manufacturers produce the flying discs–generally made out of plastic and measuring roughly 20-25 centimeters (8-10 inches) in diameter with a curved lip. The official Frisbee is owned by Mattel Toy Manufacturers, who bought the toy from Wham-O in 1994.