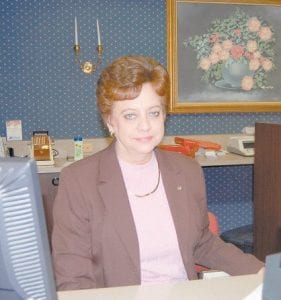 Irene Banks graduated college believing she would be a school teacher for the rest of her working life. After finding school jobs hard to come by, she decided to go to work for the former First Security Bank in downtown Whitesburg and remained there until she retired last week. (Eagle photo)

After 33 years of working in downtown Whitesburg, Irene Banks has given up her job in banking so she can spend more time sewing and cooking.

“I just turned 62 and decided I would take any early retirement,” said Banks, whose last day of work as branch manager at Community Trust Bank’s Main Street location was on January 23. “I think I am going to enjoy staying at home. I like to sew and cook.”

Banks began working at the bank, then known as First Security Banks and owned by the family of the late James M. Caudill, shortly after she graduated Morehead State University with a teaching certificate but found no openings available in her chosen field.

“I applied with the bank and have been here ever since,” said Banks, who spent many years as head teller and long ago became one of the bank’s most recognizable faces.

“I am going to miss seeing people and talking to people,” said Banks, who lives in Knott County. “I know a big part of them in Letcher County. If you don’t like people it would not work out.”

As head teller, Banks has trained several of the current tellers in the bank. Among them is Carol Damron, a teller who has worked at the bank for 10 years, and is now head teller.

Lorie Stephens, a teller and backup customer service representative, agreed that Banks will be missed.

“She’s just a graceful business lady,” said Stephens. “She is just a really sweet lady and she is going to be missed.”

Reed Caudill, president of Community Trust Bank of Whitesburg, said Banks has been an asset to the bank.

“She has been very accurate and a very loyal employee,” Caudill said. “She was one you could always count on. She was always on time. She is going to be surely missed.”