Irene Jent staying with her daughter 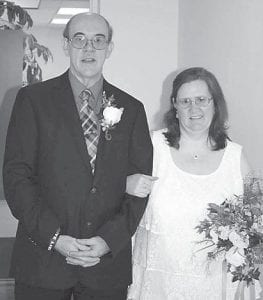 Paul and Adrienne Sturgill of Cromona, celebrated their 25th wedding anniversary with a vow renewal ceremony followed by a reception on June 22 at the Neon First Church of God. The ceremony was performed by Pastor Mark Wagoner, and those in attendance enjoyed food including a cake made by Paul Sturgill’s sister, Selena Smith. The couple expressed their thanks to those who made the day so wonderful.

Seems I’ve been too busy to write lately. I guess we all get busy this time of year.

A few of our neighbors who recently spent time in the hospital are Wendell Calhoun, Ina Campbell, and more recently, Geraldine Ison.

Danny ‘Hoot’ Campbell and his brother, Donnie Reed, came in to visit their mother, Ina, when she was in the hospital.

Irene Jent of Redfox has been released from the hospital, and her daughter, Debbie, is taking care of her. Anyone who would like to can send her a card at Debbie’s address: Debbie Adams, 8032 North Old State Road 67, Mooresville, Ind. 46158.

Mom’s sister, Juanita, was sick in the hospital in Somerset last week. She had a pacemaker put in and was feeling better.

The daughter of the late Dock and Dixie Smith, June, of Michigan, came down to Ohio to visit her brothers, and while there, fell and broke her wrist. She was also bruised up and couldn’t go back to her home until she stayed in the hospital for a few days in Ohio.

Her brother, Doyle Smith, called to let me know. He was worried about her and asked for prayers.

Coreen Pridemore and I attended the memorial service at the Fields Cemetery on Sunday. The crowd was down a little bit, but it was a nice day for the outdoor meeting. The cemetery is just past Carcassonne and ‘dinner on the ground’ was also served.

It was also an odd weekend this month, so church was held at the Indian Bottom Association Building. Bob took Rodney Ison with him.

Later on Sunday, Blair Branch Church had services at Letcher Manor Nursing Home. We stopped and picked up Dock Adams, who went with us. He was pleased that his grandson, Terry Caudill, was doing better, and they sat together at the service.

Bob stopped in to visit awhile with Evangene and Arizona Adams and enjoyed talking with them.

It’s vacation time of the year, and many have been gone to various beaches, mountain getaways, or outof state trips visiting kinfolk.

Mary Helen Blair enjoyed going out and about with her sons, Adrian and Enis. They took her out for her birthday, and then she attended a baby shower too.

Enis, Kyra and Kodi stayed about a week while here.

That’s it for now. Have a happy and safe Fourth of July holiday.