By STEPHEN OHLEMACHER
The Associated Press 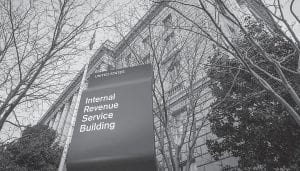 The Internal Revenue Service Headquarters (IRS) building is seen in Washington. Thieves used an online service provided by the IRS to gain access to information from more than 100,000 taxpayers, the agency said Tuesday. (AP Photo)

The thieves accessed a system called “Get Transcript,” where taxpayers can get tax returns and other filings from previous years. In order to access the information, the thieves cleared a security screen that required knowledge about the taxpayer, including Social Security number, date of birth, tax filing status and street address, the IRS said.

“We’re confident that these are not amateurs,” said IRS Commissioner John Koskinen. “These actually are organized crime syndicates that not only we but everybody in the financial industry are dealing with.”

Koskinen wouldn’t say whether investigators believe the criminals are based overseas — or where they obtained enough personal information about the taxpayers to access their returns. The IRS has launched a criminal investigation. The agency’s inspector general is also investigating.

Identity thieves, both foreign and domestic, have stepped up their efforts in recent years to claim fraudulent tax refunds. The agency estimates it paid out $5.8 billion in fraudulent refunds to identity thieves in 2013.

“Eighty percent of the identity theft we’re dealing with and refund fraud is related to organized crime here and around the world,” Koskinen said. “These are extremely sophisticated criminals with access to a tremendous amount of data.”

Congress is already pressing the IRS for information about the breach.

“That the IRS — home to highly sensitive information on every single American and every single company doing business here at home — was vulnerable to this attack is simply unacceptable,” said Sen. Orrin Hatch, R-Utah, chairman of the Senate Finance Committee. “What’s more, this agency has been repeatedly warned by top government watchdogs that its data security systems are inadequate against the growing threat of international hackers and data thieves.”

Koskinen said the agency was alerted to the thieves when technicians noticed an increase in the number of taxpayers seeking transcripts.

The IRS said they targeted the system from February to mid-May. The service has been temporarily shut down.

Taxpayers sometimes need copies of old tax returns to apply for mortgages or college aid. While the system is shut down, taxpayers can still apply for transcripts by mail.

“In all, about 200,000 attempts were made from questionable email domains, with more than 100,000 of those attempts successfully clearing authentication hurdles,” the agency said. “During this filing season, taxpayers successfully and safely downloaded a total of approximately 23 million transcripts.”

The agency is still determining how many fraudulent tax refunds were claimed this year using information from the stolen transcripts. Koskinen provided a preliminary estimate, saying less than $50 million was successfully claimed.

Thieves can also use the information to claim fraudulent tax refunds in the future. As identity theft has exploded, the agency has added filters to its computer system to identify suspicious returns. These filters look for anomalies in the information provided by the taxpayer.

Until recently, tax refund fraud has been surprisingly simple, once thieves obtain a taxpayer’s Social Security number and date of birth. Typically, thieves would file fake tax returns with madeup information early in the filing season, before the legitimate taxpayers filed their returns — and before employers and financial institutions filed wage and tax documents with the IRS.

The refunds would often be sent electronically to prepaid debit cards or bank accounts.

However, old tax returns can help thieves fill out credible-looking returns in the future, helping them get around the IRS filters.

The IRS said it is notifying taxpayers whose information was accessed.