Is Busch’s future brightest of all? 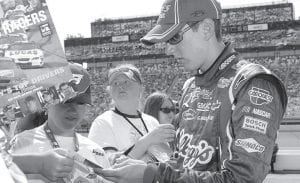 For a kid who just lost his job, Kyle Busch is certainly on top of the NASCAR world.

Busch became NASCAR’s newest free agent when he was pushed out of Hendrick Motorsports so the team could make room for Dale Earnhardt Jr. It’s opened a ton of opportunities for the talented but temperamental driver, as at least six of the top Nextel Cup owners are on record as being interested in signing him.

And, believe it or not, Busch has far more opportunities than Earnhardt did.

Earnhardt had very firm criteria during his job search, which was limited to only the top Chevrolet teams in NASCAR. He wants to win a championship, and at age 32, the clock is ticking on his career. He couldn’t gamble with his choice, and realistically only had three teams to choose from.

Busch doesn’t have the same restrictions. He can drive a Chevy, Ford, or Dodge – maybe even a Toyota – and at 10 years younger than Junior, Busch has a much bigger window to find success. Busch can take a risk, perhaps sign with a smaller team, and become the cornerstone of a long-term plan.

“I’m interested in talking to anybody who wants to talk,” Busch said. “Whether it’s DEI, whether it’s Gibbs, RCR, Evernham, Yates, whoever’s got an open seat. Whatever, lets go, let’s sit down. Let’s have dinner.”

Busch’s appointment book should be full by the end of the week.

Richard Childress, Ray Evernham, Chip Ganassi, Bobby Ginn, Robert Yates, Michael Waltrip and Dale Earnhardt Inc. have all said they want to talk to him. Joe Gibbs Racing declined to comment, and Jack Roush, who had Busch under contract when he was 16, said he won’t be revisiting the relationship.

Armed with a new agent – he fired his previous representation last week when his job at Hendrick fell apart – Busch spent the weekend at Michigan International Speedway laying the groundwork for what should be a lucrative new deal.

He was matter-of-fact when discussing his impending split from Hendrick, where he signed shortly before his 18th birthday. He had nothing but praise for Rick Hendrick, and insisted the split was mutual after talks on an extension had stalled right about the time Junior hit the market.

Busch chatted with fans, signed autographs on pit road, and hung out with University of Michigan football players in front of his hauler. And his performance on the track was stellar: He nearly won the Truck Series race, finishing second, and was sixth in the Nextel Cup event.

It was a major spin at a time when Busch has never had more at stake – he controls his destiny, and his worth has never been greater. But after listening to the interested car owners, Busch didn’t need to do any damage control.

“I’m interested because he’s a talented driver,” Ganassi snarked. “If he was a no-talent driver, nobody would be interested in him.”

Racing is no different than any other sport in that performance and potential go a long way toward masking personality issues, and there’s no denying that Busch has a mix of both.

He’s got four Cup wins and made the Chase for the championship last season, but it’s never been a smooth ride. Busch has been criticized for his driving style – even older brother, Kurt, accused him last month of being too aggressive – and many veterans have fumed over his arrogance.

He’s had some eyebrow-raising behavior, such as storming out of a news conference, throwing a safety device at Casey Mears and launching an ungracious rant against NASCAR’s Car of Tomorrow after winning its debut race.

The worst human being alive? Most certainly not.

Busch isn’t even on the radar of the most poorly behaved athletes, past and present. At a time when NBA and NFLplayers are constantly falling on the wrong side of the law, Busch looks like an angel.

“If you make a simple comparison, it’s not like the kid’s Mike Tyson,” Evernham said. “He’s not out grabbing women and doing drugs. He has a temper, and he says things once in a while. To me, that’s not really a bad thing.

“It’s hard to take a guy you want to be total fire and drive that thing on the line every minute, and then expect him not to be emotional. You’ve just got to try to help somebody like that control his emotions.”

Roger Penske has spent the past two seasons doing it with Kurt Busch, with seemingly positive results. Before he almost ran over one of Tony Stewart’s crew members two weeks ago, Kurt Busch had made tremendous progress in remaking his bratty image.

Rick Hendrick patiently tried to the do the same with Kyle Busch, and recognized that it was a work in progress. And before May 10, when Earnhardt became a free agent, Hendrick had no plans to walk away from the project.

But when the urge to align with NASCAR’s biggest star was too overwhelming, Busch became expendable and Hendrick cut him loose.

So his next car owner will pick up where Hendrick left off, and there’s no shortage of suitors who believe they can be the one to tame NASCAR’s wild child.

“You have to remember his age – I can name you eight or 10 guys in here at his age that were a handful,” Childress said. “He’s learning. Every new experience, you get educated a little more and I’d say this has educated him a little more.

“Kyle is a very young, talented race driver like many, many I’ve seen come up and be like that. Kyle has got a great future ahead of him. Age, time, everything, it all comes with experience.”