Is Drew Carey the next Regis? 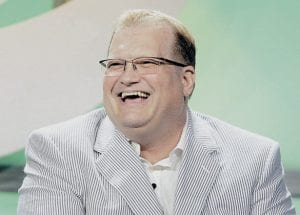 Drew Carey is the new host of CBS’ “The Price is Right” and the upcoming CBS primetime game show “Power of 10.” (AP Photo/Nick Ut)

Drew Carey has been living a comfortable life of semi-retirement. In a couple of months, he could be Regis Philbin.

Carey was just selected as Bob Barker’s replacement on the daytime game “The Price is Right,” and this week he will debut as the host of “Power of 10,” a prime-time game that CBS has high hopes for.

A daytime hit and commanding presence in prime-time – sounds just like Philbin in the “Who Wants to Be a Millionaire” days. And that wouldn’t even count the endless reruns of “The Drew Carey Show” in syndication.

To hear Carey tell it, he’d be fine either way.

“I didn’t want to do TV in the first place,” he said over lunch last week. “I’d be happy going to soccer games, traveling. I never have to work again. I can live off my interest. I don’t even have to touch the principal.”

He still bears bruises from the messy end to his ABC sitcom. Viewers had tired of it, perhaps because syndication made it possible to see so much Carey each day, and ABC paid little attention to the final season. Top executives from the network and production company didn’t even bother coming to the show’s wrap-up party.

Put-downs in the press hurt even more, particularly one magazine’s snarky remark that 200 episodes of “The Drew Carey Show” were 100 more than anyone wanted to see.

“A lot of people slammed me out of nowhere, and I’m just trying to entertain people and make a living,” said Carey, 49, Cleveland’s favorite son. “Everyone was taking potshots at me when my show was failing in the ratings … I thought, I don’t have to put up with that anymore.”

Carey had been doing occasional Web stories about common sense approaches to solving problems for the libertarian Reason Foundation and a Travel Channel series following a soccer tournament in Europe. He takes out his iPhone to show some of his professional-quality pictures of soccer matches.

But when Michael Davies, former producer of “Who Wants to Be a Millionaire,” called Carey this spring about “Power of 10,” he was intrigued.

The game, which debuts on CBS with 8 p.m. episodes on Aug. 7 and 8, tests contestants on how they think fellow Americans responded to questions on culture and politics. A winner can take home a cool $10 million.

“This is going to be huge, this show,” Carey said. “The material is so interesting. People talk about a show you can talk about the next day at work, around the water cooler. This is the show.”

The day after Carey shot a pilot episode of “Power of 10,” CBS approached him about replacing Barker.

He fits perfectly into the current mold of an ideal game-show host – the good-natured comedian.

“He is a superb game-show host because he has such empathy for people,” Davies said. “He really relates to people and wants them to win. He gets visibly excited about people when they do well.”

The similarities between “Power of 10” and “Millionaire” go beyond Davies. It’s a “money tree” type of show that requires contestants to risk most of what they’d already won for the chance of getting really big money. To win $10 million, a player has to walk away from $1 million at the risk of being knocked down to $100,000.

“Millionaire” premiered in August and quickly caught fire among bored TV viewers, a strategy CBS clearly is hoping to duplicate.

One fanciful question asks which city should be saved if asteroids were headed toward New York and Los Angeles and the government had the capacity to save only one. Sorry, West Coasters, more than two-thirds picked New York.

Carey is playing along with the contestants; Davies said the host does not know the answers before they are announced to the audience.

Questions mix the topical (how many white Americans say they would never vote for a black person? 18 percent) and silly (how many American women go without underwear at least one day a week? 34 percent). Carey was surprised that more than two-thirds of people asked said they would report it to authorities if they saw a Mexican crossing the border illegally.

Doing well on “Power of 10” takes social intelligence, he said.

“There are lots of different ways that people can be smart,” he said. “You don’t have to be book smart to win this game show. You don’t have to know a lot of trivia or useless facts about things. But you do have to have a good feeling about what the pulse of America is.”

Davies and Carey, both soccer fanatics, have quickly bonded. Davies even agreed with Carey said he wanted to schedule tapings around home games for the L.A. Galaxy team.

Both men have even agreed on a name for the soccer team they would buy if “Power of 10” hits it big.

If Carey becomes the next Regis, money won’t be a
problem.