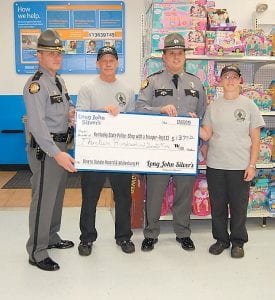 When I was a schoolboy in the late 1950s and early ‘60s, December weekends usually found me in the woods and in the shadow of my cousin, the late “Little” Steve Craft, so-called because his father was my Uncle Stevie who didn’t believe in calling anybody Junior.

Once “ Little” Steve reached adult status, he became plain Steve to everybody outside the immediate family. It’s too complicated to explain. Suffice to say that when I talk about them, to this day, I find myself telling people that Stevie was the dad and Steve, the son, instead of it being the other way around.

Anyway, Steve was about 10 years older than me and he was, essentially, my big brother. I certainly spent more time in their home on weekends, growing up, than I did in my own. And we usually spent half the day on Saturday, before or after I’d run my Grit paper route, and the better part of Sunday, “hunting”.

Meaning that we took two or three small, beaglerelated dogs into the woods and fields, armed ourselves with shotguns and hoped that we might actually get a shot at a squirrel, rabbit, grouse, quail or woodcock. I can count on my fingers and toes and have a few left unused, the number of times we actually came home with any sort of game that Aunt Nan could turn into table fare, but the number of times we tried would run into the numerous dozens, if not hundreds.

More often than not we came out of the woods after a five- or six-hour foray with exactly the same amount of ammunition we had before we left the house. If we did luck out and get a shot at something, Uncle Stevie would glance at our game bags when we stepped onto the porch, upon returning, and shake his head.

“I heard you waste that shell,” he’d say. And once, when one of us had actually bagged a woodcock, Uncle Stevie remarked, “Them little snipes don’t have a shotgun shell’s worth of meat on ‘em.”

I told him that I’d pay him for the shell and take it home for Mom to fix if that was the way he felt about it, not that he’d actually, himself, bought the ammo. He promptly said, “Nahhhh. What’s done is done.” Little Steve winked at me because we both knew he was already drooling over the bird even though it was still a long way from being in the frying pan.

Once, while I was just barely old enough to be allowed to go hunting, we walked by a large brush pile, composed of numerous limbs and smaller branches that had been left where someone had harvested trees for timber or firewood.

Steve picked up a rock in the five-pound range, heaved it atop the brush pile and a couple of rabbits, fast as lightning, ran out. He managed to shoot one of them, which accounts for one of the finger and toe counts mentioned above. This was before I was even allowed to pack a gun into the woods, much less actually shoot one. But I still remember the incident like it happened only yesterday.

For several years thereafter, every time we went to the woods both of us would pick up hefty creek rocks and pack them well over half a mile up the mountainside until we reached that particular brush pile which we had long since named “The Rabbit Pile.”

We took turns standing “gun ready” while the other one heaved the rocks onto the pile, but to the best of my knowledge we never again scared a rabbit out of it. At least if we did, neither of us saw it leave the premises. I know, for sure, that on numerous occasions the dogs chased rabbits that took refuge there, but no amount of rock throwing would ever bring them out. Once burned, twice shy.

I’m sure The Rabbit Pile has long been rotted and turned to humus, but if anybody on Blair Branch still needs a good load of five-pound rocks, I’m reasonably sure that I could still tell them exactly how to find one, already piled up, in a spot where they would not, ordinarily think to look.

And if any of the younger generation has ever wondered how that big pile of creek rocks got placed way up on the mountain behind L.B and Shirley Blair’s old place, now you know.