Is it possible to pick perfect NCAA bracket? 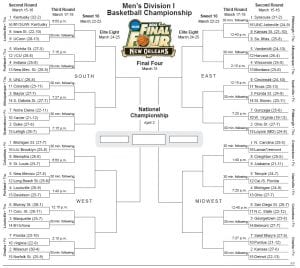 Want to be sure you have the perfect March Madness bracket this year? Not possible.

If you were to stack the amount of paper it would take to fill in every bracket with every possibility among the 68 teams who will play 67 games over the next three weeks, it would not fit inside the universe.

So says Michael Weimerskirch, a math professor at Augsburg College who gets paid to think about numbers and the way they affect the Kentuckys, Butlers and VCUs of the world.

Or, to put it another way: “You’re just as likely to win Powerball three consecutive times as you are to picking a perfect bracket by flipping a coin,” Weimerskirch says.

Of course, the NCAA tournament is all about making the impossible seem possible. Butler, a school with only 4,000 kids, made it to the finals two years in a row. VCU started the tournament last year as a No. 11 seed and wound up playing in the Final Four.

For those setting their sights on winning their friendly office pool, there are, in fact, ways to improve your odds.

“You need something unusual to go your way,” Weimerskirch says .

There figures to be plenty of that over the next three weeks, ending April 2 at the Superdome in New Orleans. The games started Tuesday, with two first-round matchups: Mississippi Valley State vs. Western Kentucky and BYU vs. Iona.

The tournament gets into full swing Thursday and Friday with 64 teams in action.

Watching closely, once again, will be President Barack Obama, whose re-election campaign is welcoming visitors to his website to pick the winners. No wagering please, though anyone visiting the site is invited to donate money to Obama’s campaign.

In an attempt to give fans even more facts and figures to ponder, the NCAA cracked the window ever so slightly on its behindclosed doors selection process, answering more questions this year and even releasing a list of the teams and the way they were ranked from 1 to 68.

At the end of the day, though, labeling Kentucky as the No. 1 overall seed, or knowing that fifth-seeded Vanderbilt was really the 18th-ranked overall team, doesn’t give much more clarity to the guesswork.

After all, in the past week, Kentucky lost to Vanderbilt, while a bunch of other top-seeded teams in their conference tournaments also lost: Kansas, Syracuse, North Carolina, Washington, to name a few.

In short, none of this is easy. According to a study by bookofodds.com, the odds of picking a perfect bracket by always going with the better-seeded team are about 35.3 billion-1.

Bookofodds.com took a look at a teen who picked every game of the first two rounds correctly last year and found the odds of that happening were 13.46 million 1.

That’s not that far removed, the website said, from the odds of a person in Missouri dying from contact with hand-held power tool in a year. That’s 13.25 million-1.

(The odds of the Missouri Tigers winning the national championship, on the other hand, are listed at 12-1 in Vegas. Not bad considering.)

So, for the relatively modest cost of $10 or $20, you, too, can buy a bracket, try to beat the odds, get some skin in the game and actually care about March Madness, even if you don’t know a basketball from a dodgeball.

You can go with logic and scouting reports, put on a blindfold and throw darts or choose teams because you like their uniforms. The luckiest could come out with a few extra ducats when the nets are cut down in New Orleans. Many more will find themselves losing — and not only to the guy in the next cubicle, but to their 2-year-old nephews, their neighbor’s cat and their buddy’s favorite stuffed animal.

“The most interesting story I heard came back 15-20 years ago, when Duke won it all,” Weimerskirch said. “It was a fairly large office pool of 1,000 people. One guy based it on who would win if the mascots fought. The rules were like, people with guns would beat animals, who would otherwise beat people who didn’t have guns. Turns out, supernatural creatures like devils would beat most things.”

Sure enough, it was a great year to be pulling for the Blue Devils.

No matter how you arrived at that conclusion.