Is it wrong to attend church for its coffee? 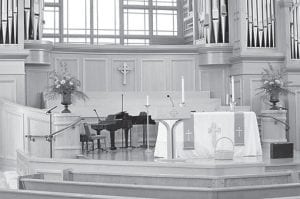 If you were thinking of going to church anytime this year, chances are, you just did. Christmas does for church what it does for Macy’s: Brings in the crowds. But what about the rest of the year?

Many of today’s old-fashioned, smaller churches are struggling, says the Rev. Don Nations, founder of DNA Coaching, a company that consults with business executives as well as church leaders. “About 80 percent of mainline churches — Methodist, Lutheran, Presbyterian, Episcopalian, etc. — are declining in worship,” Nations says. “In the United Methodist Church, for example, half of churches have fewer than 50 in worship.”

Those Norman Rockwell congregations are having a hard time because they’ve been doing the same old same old in an era of intense change. Walk in and there’s the pastor, the pews, the choir. Meantime, the new megachurches are growing, by ditching almost all of those. (Not the pastor.) Instead, they’re embracing marketing, media and even design to bring back worshippers — and not a moment too soon.

“Growth is coming not from older people, it’s coming from younger people, so the facilities we’re involved with are geared toward adding audio-visual to the sermons,” says Richard Lovelace, a senior vice president at Stellar, an architectural firm that works on a lot of megachurches.

This means that many of the sanctuaries his firm designs today look more like theaters — the perfect setting for a rock concert or movie. The pastor still preaches, but now his sermon may be accompanied by a video. Words to the hymns appear on the screen, or screens — hymnals a thing of the past. And as for the music, “The old days of the choir lofts and old people singing in their robes to a piano or organ, I think they’re gone,” Lovelace says. Instead, expect a band.

Young people do, and the churches are ready for them. Many have services throughout the morning — or even Saturday night services — each calibrated to a slightly different demographic. For instance, teens may be hanging out in a sort of rec room while the middle schoolers hear a service just for them. An hour later, the groups switch, and the middle schoolers are in the rec room, playing foosball or pingpong, while the teens hear a sermon complete with rock music.

Nobody sits in pews.

“Everybody has their own what I’ll call ‘butt space,’” says Lovelace. Pews have been replaced by the kind of seats you’d find at the movies. And upon leaving these, everyone can gather at the cafe also housed in the church com- plex, serving gourmet coffee — of course.

If all this sounds ridiculously nouveau, that’s because you’re not thinking back far enough. The great cathedrals of Europe were the megachurches of their day. Maybe they didn’t have videos, but that’s what stained glass windows were for: To illustrate the gospel in the coolest medium of the day — glass. The only reason Chartres didn’t continuously loop Christian rock videos is because it was built 900 years too soon.

When folks attend church or synagogue or the mosque, it creates community. If it takes rock music or comfy seats to bring them, well, that’s just today’s answer to flying buttresses. And as for adding coffee? All I can say is: Amen.

Lenore Skenazy is the author of “Free-Range Kids: How to Raise Safe, Self- Reliant Children (Without Going Nuts with Worry),” and, “Who’s the Blonde That Married What’s-His-Name? The Ultimate Tip-of-the- Tongue Test of Everything You Know You Know — But Can’t Remember Right Now.”