Is it wrong to speak your mind? 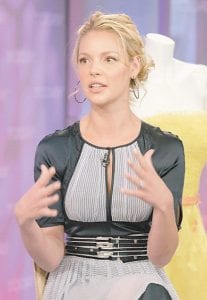 When Katherine Heigl opens her mouth, people listen. They don’t always like what they hear.

If the media loves a celebrity lightning rod, then Heigl certainly delivers the goods. The Emmy-winning actress has taken heat for her blunt public comments and doesn’t seem to give two winks.

According to her detractors, the “Grey’s Anatomy” star’s outre behavior includes: demanding a higher salary in contract negotiations with ABC; slamming the megahit comedy “Knocked Up,” in which she starred with Seth Rogen and Paul Rudd, as “a little sexist” in painting women as “humorless and uptight” and men as “lovable, goofy”; and, recently, refusing to seek an Emmy nomination because “Grey’s” writers failed to deliver the goods for an awardsworthy performance.

At times, Heigl comes off like a reality show contestant who says, “I’m not here to make friends. I’m here to win.” That attitude, as any avid viewer of shows from “Survivor” to “The Bachelor” would agree, wins few allies on the island (or in the mansion), but it sure makes for good TV.

But in a world of bland, media trained celebs, is it such a bad thing to speak your mind?

After all, celebrities have spouted off for years, bashing everything and everyone from presidents to fellow actors to directors. But Hollywood is like high school — only meaner — and hammering the popular kids might have consequences that take years to undo.

Gabler named screen legend Paul Newman as an example. Newman, now 83, shunned the movie-industry hoopla and never showed up in 1986 to accept his best-actor Academy Award for “The Color of Money,” after having been nominated seven times before.

“He didn’t live the way a star was supposed to live. There was an expectation … placed on him, and he didn’t satisfy that expectation and Hollywood took retribution,” Gabler said, citing Newman’s awards snubs.

And yet, that tough-guy persona enhanced his public image as a man of integrity who lived on his own terms, Gabler said. Newman’s awards-hating colleagues included Marlon Brando and George C. Scott, who refused an Oscar for his grandiose performance in 1970’s “Patton.” Brando sent a Native American surrogate to turn down his statuette when he won best actor in 1972 for “The Godfather.”

Heigl, on the other hand, simply declined to put her name in consideration for an Emmy bid.

But it was her reasons for doing so that ignited a media firestorm, fueled by this statement: “I did not feel that I was given the material this season to warrant an Emmy nomination and in an effort to maintain the integrity of the academy organization, I withdrew my name from contention. In addition, I did not want to potentially take away an opportunity from an actress who was given such materials.”

Heigl’s announcement spread swiftly online, where it was variously heralded, ridiculed and hashed out by a vocal mob eager to weigh in.

“First of all, she did something crazy — and that is she told the truth,” said veteran publicist Howard Bragman. “At the very least, she told her truth. … And in this town, it’s not always a great idea, because what you have to understand is television is a very collaborative industry, and what she’s essentially done is trash her writers. These are people you have to go to work with every day.”

ABC Entertainment President Stephen McPherson denied speculation earlier this month that Heigl wanted to leave the hit medical drama. He then defended the series, saying that all involved in it deserve “an enormous amount of credit.”

Melissa Kates, Heigl’s representative, said the actress was unavailable for comment on this story.

Bragman represented Isaiah Washington during the actor’s 2007 departure from “Grey’s” following his alleged use of a homophobic slur. Heigl had publicly criticized Washington, telling the media: “I’m going to be really honest right now, he needs to just not speak in public. Period.”

“It supports what we know about Katie Heigl, is that she’s kind of an edgy, mouthy girl who’s a bit of a rabble rouser, and as long as she’s able to open movies and put butts in seats, she’s still going to have a career,” he said.

But outspoken female stars such as Heigl could run into problems keeping an audience just by dint of gender.

“I think women have a much more difficult time, because when a woman makes demands as Barbra Streisand always did, I think they’re more likely to say, ‘What the hell does she want?’ You don’t see it in the same terms of integrity and honesty. It’s a harder sell,” Gabler said.

Kim Basinger’s career, for example, pretty much went downhill after she refused to appear in 1993’s “Boxing Helena,” in which a woman is forced to live in a box after her limbs are amputated by a surgeon in a desperate act of courtship. Basinger, who said she was put off by the film’s gratuitous sex scenes, was sued for breach of contract and ordered to pay $7.4 million in damages. She filed for bankruptcy but had a come back in 1997 with “L.A. Confidential,” for which she won an Oscar for supporting actress.

Indeed, actresses — especially those with conventionally attractive looks such as Heigl and Basinger — are largely expected to play the game, shut up and smile, while demanding actors such as Sean Penn are handed creative control and respect, among eye rolls.

“In this town, women who don’t just snap and say, ‘OK, yes sir, yes ma’am,’ start to get a reputation for being difficult,” Heigl said last year in an interview with Entertainment Weekly. “But within the last five years, I’ve decided it’s not worth it to me to be pushed around so much.”

Jessica Grose, an editor at Jezebel.com, a Web site for women, said men and women face different criticism: While Tom Cruise’s sofa antics on “The Oprah Winfrey Show” would be endlessly mocked, Heigl’s comments might invite verbal lashings and insults about her looks.

“With the 24-hour news cycle, … anything you say that’s remotely off the cuff or interesting is going to get repeated and reported on,” Grose said. “I think any celebrity now who really speaks his or her mind is going to be raked over the coals for it.”

Gloria Allred, the Los Angeles based feminist lawyer, said Heigl has now branded herself as “more independent,” and compared her to a young version of Katharine Hepburn, who successfully promoted an image of candor and Yankee pluck.

“In terms of being a role model for other women, I think it’s important that people learn how to speak their mind after they assess the risks and rewards,” noted Allred, who said she thinks Heigl will reap benefits by being seen as someone “who is not willing to submit to the Hollywood spin machine.”

So far, Heigl’s career seems bright. She had success with “Knocked Up” and “27 Dresses,” and is set to co-star with Gerard Butler in “The Ugly Truth” next year.

But will fans continue to buy the Heigl brand of honesty, or write it off as shameless narcissism?

“There’s a very tenuous kind of connection between stars and the public, and it’s very delicate … in terms of how that contract … is played out,” Gabler said. “Stars have to be more than we are obviously, but if they disconnect from us, … if we feel that our job is to laugh at them or to enjoy them, rather than it’s their job to make us laugh at them, to make us enjoy them, they break the contract.

“So that contract that she has — it’s still pending.”