Is Juzang as tough as Calipari thought? 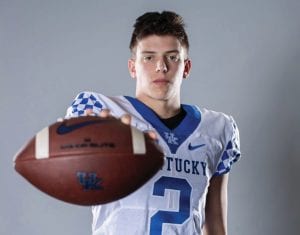 “The one thing that I’m going to tell you about Johnny, he was not afraid. Never was that an issue,” Calipari said.

Of course, he also followed that with some perspective he’s shared before about first-year players who didn’t play as big a role their first year as they might have hoped.

“In this game that you play, most of it is conquering yourself first before you worry about conquering anybody else. This was all new to him. He had never played at this pace. He had never fought like he had to fight. He had never had to be in a position defensively where you must guard,” Calipari said.

“If they’re going at you every play, you personally, you cannot be in that game. And so he, as the season went on, each week that went by he learned and got better and better. But he was a freshman, and I’m going to say this: He played behind some pretty good players. That doesn’t make him any less a player. But he played behind some good guys.”

Those guys were SEC Player of the Year Immanuel Quickley, likely NBA draft lottery pick Tyrese Maxey and Ashton Hagans, one of the nation’s best defensive players. Juzang played in 28 of UK’s 31 games and averaged 2.9 points, 1.9 rebounds and 12.3 minutes per game. He shot 37 percent overall and 32.6 percent from 3-point range.

Three days after Calipari talked about Juzang’s progress the freshman surprised the coach by putting his name into the transfer portal and apparently will follow the same path that three other west coast players — Kyle Wiltjer, Marcus Lee and Jemarl Baker — did when they transferred. Many thought Juzang was possibly homesick but his father did not make it sound that way in an interview with Kyle Tucker of The Athletic.

“He’s got skills he wants to hone and showcase. You kind of have to look at Johnny’s minutes last year. Most of them were the result of either foul trouble or someone being injured or unavailable. If Johnny is in a situation where he’s not looking over his shoulder and knows he’s going to play, I think he’s always going to do well,” Maxie Juzang said.

“But any player on a shorter leash, where they’re afraid to make one or two mistakes or miss one or two shots, it’s tough to be successful in that environment. He did really well when his minutes got better, but I don’t think his minutes were necessarily the result of him being the No. 1 guy or No. 1 choice.”

Shorter leash? Not sure how his father thought he should be playing more than Maxey, Quickley and Hagans but apparently he did. Yet Maxie Juzang also called Calipari a “great coach, great people person, great motivator and communicator” and said he had no doubt Calipari wanted the best for his son.

“That’s a relationship that is going to be great for years to come. I wouldn’t be surprised if Johnny is calling Cal five years from now,” Maxie Juzang told Tucker.

It’s just that he won’t be playing for Calipari because he was not the “No. 1 guy” at Kentucky or else he was not quite as fearless as Calipari thought.

“I really think he is a good guy. He loves people and loves those kids who play for him,” Brown said. “And he does so many good things that people do not know about.”

Brown remembered the 2012 Final Four in New Orleans — when UK won the national championship — when he had a chance to tell Calipari about “old-time coaches who did not have a nickel to their name” who the NCAA made buy Final Four tickets. Even then, the seats were at the top of the Superdome.

“John said, ‘Dale find out their names and I want to pay their way to come and if our team is in it (the Final Four), they will have really good seats. If we are not in it, I will give them my tickets.’ And you know what? He did it,” Brown said.

One thing Somerset quarterback Kaiya Sheron immediately liked about Kentucky quarterback coach Darin Hinshaw was his honesty — even if it might not have been exactly what he wanted to hear.

The 6-3, 200-pound junior verbally committed to Kentucky last week and said Hinshaw and the UK coaches had already told him what he need to work on.

“Just my consistency throwing the ball and my body language,” Sheron said.

“Yes. I like to be a perfectionist and if something goes wrong, I want to make it better myself and sometimes my good body language kind of escapes me. I have to work on that. I have to learn to keep it to myself and just play the next play. Coach Hinshaw told me nobody can be perfect every play,” Sheron said. “He’s always offering me constructive criticism and I like being pushed that way.”

Last season Sheron completed 178 of 260 passes for 3,218 yards and 28 scores in 15 games in 2019 with just five interceptions and also ran 114 times for 959 yards and eight scores. The Briar Jumpers finished 14-1 and won the Class AA state title on a 20-yard touchdown throw by Sheron on the game’s final play.

He threw for 1,846 yards and 13 scores in 2018 and rushed for 505 yards and seven touchdowns. He was also a starter on the basketball team and averaged 9.0 points and a team-high 7.8 rebounds per game to help his team finish 26-6 and reach the 12th Region Tournament semifinals.

Somerset blew an 11-point lead in the 2019 state title game against Mayfield before rallying to win its first state title in 113 years.

“That is a long time to wait and I think everybody was ready for it. I always knew we were going to win but didn’t think it would be like that. It was surreal to win like that. It was awesome,” he said. “My best friends are in the senior class. I have played with them since sixth grade. For that to be their last memory of Somerset football was awesome. I was out of my mind honestly when we won.”

Sheron considers himself a “thrower first” but likes to run to keep defenses honest. His calmness in the pocket allows him to spot secondary receivers even under pressure before he does have to run.

“I don’t like to run out of bounds. That’s not football,” Sheron said. “I would like to be a defensive lineman like my dad was but he won’t let me.”

He envisions his style as closer to Green Bay quarterback Aaron Rodgers than anyone else.

“He can evade pressure and still throw. I think I can do that,” he said.

Yet when he was younger is favorite player was former Pittsburgh Steelers safety Troy Polamalu, a Hall of Famer.

“I grew up a defensive guy. I like to hit guys,” Sheron said.

Maybe that’s why he started a pre-school morning workout program when he was in seventh grade that he still does.

“I wouldn’t say it was real voluntary in seventh grade because my dad made me do it but now it is,” he said. “My dad has pushed me but also has been the biggest influence on my career. We work out together every morning. I try to throw every morning before school and then again after school. Me and him just bonded over football.”

Hinshaw wants Sheron now to bond with potential other future Wildcats much like Lexington Catholic quarterback Beau Allen did last year after his commitment to UK.

Two of UK’s other biggest instate targets in the 2021 recruiting class are Frederick Douglas receiver Dekel Crowdus and offensive lineman Jager Burton. Crowdus has set May 10 for his decision date.

“Absolutely I am going to be talking to both of them along with others,” Sheron said. “But I know both of them and a big-time receiver and big-time offensive lineman obviously are pretty important guys for me.”

Last week ESPN had a feature on former UK basketball star Rex Chapman and his rise to a social media star after his life crashed due to his opioid addiction when his 12-year NBA career ended.

Chapman shared his story with ESPN’s Ryan McGee, including the low points after he was arrested for shoplifting. He revealed how at one time he was actually living in his car because he had no money and how long his addiction had been going on before he bottomed out.

“I think there are lot of people who kind of gave up on him,” Mc- Gee said. “He has, to his credit, for five years been clean and managed to beat the addiction.

“Something he was very adamant about from the start was that he hoped people would come away with a sense of hope. He is now the advocate for the fight against opioid addiction. He developed his painkiller addiction out west but we all know Kentucky is ground zero for opioids.

“He asked me several times if doing this would help people. He talked about all those who have suffered. It’s amazing as low as he got that he is not only okay but is back helping others. We all have someone who has been impacted by drugs and his story hopefully helped a lot of people.”

McGee said Chapman was the “worst kind of pioneer” because when he originally asked for help with addiction it was such a new thing no one was certain how to help him.

“He not only was one of the very first ones to ask for help, but certainly one of the first high profile people to need help,” McGee said.

McGee hopes even older, diehard UK fans learned more about Chapman than they knew before.

“He lost touch with people back home. He hit bottom,” McGee said. “I think caught a lot of folks off guard and just makes you love him even more. He was a NBA star, hit bottom, rebuilt his life does all he can to help others. It’s really an inspiring story.”

Quote of the Week : “We actually talk about that for sure. I talk to him every day about where we might go and maybe going together,” Frederick Douglas four-star receiver Dekel Crowdus on possibly playing in college with four-star teammate Jager Burton, an offensive lineman.